A senior member of the Palestinian Liberation Organisation (PLO) has denounced US Vice President Mike Pence over his apparent regret that Palestinian President Mahmoud Abbas refused a meeting with him.

In an interview with Al Jazeera, Hanan Ashrawi said on Monday that the US has made any peace talks between Israel and Palestine “irrelevant and superfluous” with its recognition of Jerusalem as Israel’s capital.

“The US administration has totally ripped apart the very legal foundation for peace in the region with their latest recognition of Jerusalem as Israel’s capital,” she said.

“The Trump administration has destroyed every component of peace between Israel and the Palestinians. They sided with the Israeli occupiers.”

Pence was due to meet Abbas in Bethlehem on December 19 as part of a regional tour, but the Palestinian leader withdrew after the controversial US move to recognise Jerusalem as Israel’s capital last week.

“It’s unfortunate that the Palestinian Authority is walking away again from an opportunity to discuss the future of the region,” Alyssa Farah, Pence’s press secretary, said in a statement on Sunday.

“But the administration remains undeterred in its efforts to achieve peace between Israelis and Palestinians and our peace team remains hard at work putting together a plan.”

The US decision to move its embassy to Jerusalem has drawn international condemnation and sparked a wave of protests. Palestinians view East Jerusalem as the capital of their future state.

Jibril Rajoub, a senior Fatah politician, said that Abbas would not meet the US vice president in a statement on December 7.

“In the name of Fatah, I say that we will not welcome [US President Donald] Trump‘s deputy in the Palestinian territories,” he said.

As protests continue over the US Jerusalem move, 157 people were injured on Sunday in confrontations with Israeli forces in the occupied West Bank, Jerusalem and Gaza, according to the Palestinian Red Crescent.

At least four Palestinians have been killed in the Gaza Strip since the US declaration. 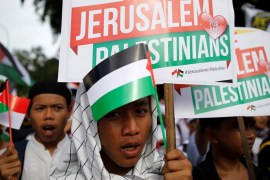 US Jerusalem move: Fury spreads from Jakarta to Rabat 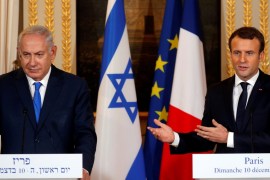 French President Emmanuel Macron says he disapproves of the decision by the US to declare Jerusalem as Israel’s capital. 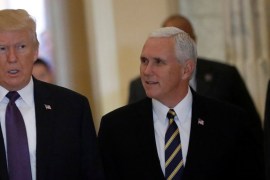