The wildfires currently engulfing large swaths of southern California are among the worst in the state’s history. The Thomas fire northwest of Ventura is barely five percent contained.

The job of firefighters is being made much more difficult by the strong Santa Ana winds which have been fanning the flames for several days.

These winds originate from the high-pressure system sitting over the western US.

The circulation around this system carries the air over the high ground of the Central Plateau and the Mojave Desert.

As the air descends towards the Pacific it becomes drier and it accelerates, being funnelled through the valleys and canyons.

The Santa Ana winds are an entirely natural phenomenon of course, and they usually peak during the month of December.

What is unusual is that wildfires peak during the autumn period. But because of the ongoing drought across California and the very dry weather during October and November, the conditions have been ripe for the wildfire outbreak we are now witnessing.

The current weather pattern is consistent with what climatologists refer to as the Ridiculously Resilient Ridge which has become more prevalent in recent years.

This results in cold weather across eastern parts of US, and unseasonably warm weather in western areas that we are seeing this month.

A report published this week in nature.com has identified a link between the melting of Arctic Sea ice, again largely the result of human-induced climate change, and changes to the large-scale weather patterns across the North Pacific.

This results in more persistent areas of high pressure which leads to an increasingly dry climate over California.

This seems to back up a report in 2014 which found the climate change is making drought much more likely in the state.

These findings applied not just to California, but to most semi-arid regions around the world, with huge impacts on water availability and agricultural production, resulting in the destabilisation of large human populations.

So are California’s wildfires here to stay?

Fortunately, there is likely to be some easing of the Santa Ana winds in the coming days, allowing firefighters to gain a foothold in their battle.

Unfortunately, there is no sign of any significant rain within the next 10 days, so progress may well be slow.

The state of California may need to invest in more firefighting resources as the wildfire season is likely to become longer in the future.

The Santa Ana winds too, will become more frequent and persistent should high-pressure systems become more permanent features over the western US.

The combination of drought and strong, dry winds makes it increasingly likely that California will have to adapt to the increasingly inhospitable conditions through the rest of the century, especially if the US continues to fail to commit to global agreements to cut climate-changing greenhouse gas emissions. 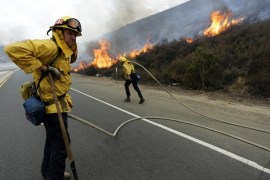 High winds pose threat even as Eric Garcetti claims victory in battle against the ‘largest wildfire in city’s history’. 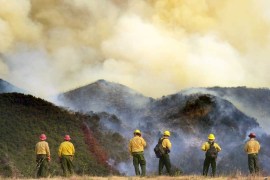 Raging blaze near Yosemite National Park displaces thousands of Mariposa residents in the western US state. 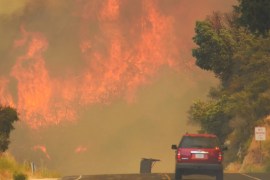 Thousands flee wildfires burning in the US and Canada

Thousands forced to evacuate after wildfires hit western US and Canada.