Athens, Greece – Protesters have clashed with police officers in the Greek capital as they marched through the city to commemorate the ninth anniversary of a police shooting that killed a teenager.

“The last word will be ours, these days are for Alexis,” demonstrators chanted as they marched through central Athens. “Cops, pigs, murderers,” others yelled.

The march mostly remained peaceful, but a small group of masked demonstrators smashed windows of banks and stores during the protests.

More than 2,000 police officers were deployed in the city, according to local media reports.

A second march was held in the evening, with hundreds of demonstrators assembling and rallying against the police.

Giorgos Maniakis, a demonstrator with the Initiative for Political and Economic Solidarity, said that Grigoropoulos “has become a martyr for the movement”.

“The murder of a 15-year-old young person nine years ago was a moment that was a prelude for everything that followed in Greece,” he told Al Jazeera, referring to economic crisis and political violence the country has witnessed in recent years.

“It marked a very important experience for a whole generation.”

Savas Michael-Matsas, leader of the leftist Workers Revolutionary Party, spoke to Al Jazeera as he marched in Athens. “He was only 15 years old and killed by police brutality,” he said.

“The revolt which followed the murder of Grigoropoulos was the first political explosion of the current crisis,” he added.

“He was an innocent victim of police brutality, but the revolt is symbolic of the political and social problems that make life so terrible in this country.”

Michael-Matsas argued that the teenager’s death signalled to many Greeks that “if you just protest you can be killed”.

The police officer who shot Grigoropoulos was sentenced to life in jail after being convicted of deliberate manslaughter.

Yet, the killing subsequently sparked massive upheaval across Greece, with riots and clashes with police on a regular basis.

Late on Wednesday, anarchists and other demonstrators clashed with riot police in Exarchia, a neighbourhood that serves as a stronghold for anarchist and leftist activists.

Demonstrators erected barricades throughout the neighbourhood, setting fire to rubbish bins and hurling rocks and chunks of pavement stones at police officers. Officers fired tear gas and flash bangs at the demonstrators.

Writing on Twitter, Kyriakos Mitsotakis, leader of New Democracy, a centre-right opposition party, accused the leftist-led government of failing to control the unrest on Wednesday.

Syriza, the ruling party, came to power in January 2015 after campaigning on a left-wing platform. It has since become the target of criticism for reneging on its promises to abandon the country’s austerity programme.

Seraphim Seferiades, a politics professor at the Panteion University, said the annual commemorations of Grigoropoulos’s killing serve as “an outlet for people to express anger and rage” at Greece’s ongoing political and economic crises.

“It is a display of genuine anger for the most part – but not exclusively – against police brutality, which has been very much felt by many Greeks,” he told Al Jazeera.

“The solution is to deal with the political issues underneath, which requires to change policies,” he added, referring to the country’s austerity measures and economic hardships.

“But there has been no political will to do that.” 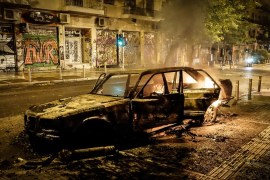 Thousands of Greeks demonstrated to mark the Polytechnic student uprising that led to the 1974 collapse of the Junta. 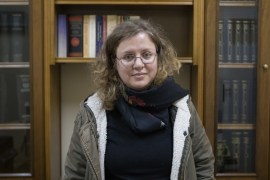 Greek lawyer latest to be assaulted by far right

Greece has seen a string of far-right attacks targeting political opponents and migrants in recent months. 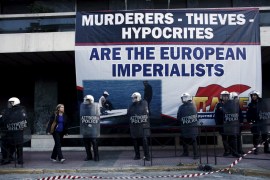 Anger over Greek plan to sell weapons to Saudi Arabia

Greece plans to sell 66m euros worth of surplus bombs and missiles to Saudi Arabia amid ongoing war in Yemen.