Egyptian President Abdel Fattah el-Sisi gave his security forces a three-month deadline to restore “security and stability” to the country’s northern Sinai province, but experts say his strategy has already caused more damage to the region and its residents.

After the latest string of attacks, Sisi on Wednesday reiterated his pledge to restore security in a televised appearance, saying his government would use “brute force” against armed groups in the area.

On November 24, more than 305 people were killed in a bomb and gun attack on a mosque in Bir al-Abed, a small town in Sinai, shortly after Friday prayers. According to local media reports, 120 others were wounded in the attack, which took place about 40km west of El Arish, the province’s capital.

In response, the Egyptian military launched air attacks on targets in mountainous areas surrounding Bir al-Abed hours after the attack.

Sinai researcher and writer Mohannad Sabry said that signs of Sisi’s “brute force” strategy already began to appear last week, when police and military forces began raiding the villages and residential clusters near the site of the attack.

“Locals have estimated that such raids detained dozens of people, mainly displaced over the past years from the areas of Sheikh Zuwayyed and Rafah,” he told Al Jazeera.

According to Sabry, the detainees included several people who were leading a community effort to collect donations for the victims of the latest attack.

The Sinai Peninsula, a volatile desert region, is split into two governorates – north and south – and has been a hotbed for various armed groups.

Egypt has for years been battling an armed movement in the thinly populated desert region, which has gained pace since the military overthrew democratically elected President Mohamed Morsi of the Muslim Brotherhood in mid-2013.

In 2014, after a deadly suicide bombing that killed 31 soldiers, Sisi declared a state of emergency in the peninsula, describing it as a “nesting ground for terrorism and terrorists”. The declaration brought with it curfews and highly restricted the residents’ freedom of movement.

It also led to the erasing of entire villages and the destruction of an agricultural economy, says Sabry, who spent several years in the region.

“If Sisi’s pledge means intensifying the use of brute force, then we are certainly anticipating much more losses, higher levels of oppression and more losses and harm inflicted on the community,” he said.

The pattern of the last four years has left the people of Sinai “terrified” after every attack.

“The local communities of North Sinai have become accustomed to the fact that the regime and its authorities would not invest any policies or effort to protect the civilians, but will continually view them with suspicion and clamp down on them with sometimes lethal force at any moment, especially in the aftermath of attacks,” Sabry said.

The mosque in Bir al-Abed was frequented by Sufi Muslims, a sect of Islam perceived as “impure” by groups affiliated with the Islamic State of Iraq and the Levant (ISIL, also known as ISIS) group.

Although no one claimed responsibility for the recent attack, local affiliates of ISIL have claimed other attacks in the last few years. Previous attacks in Sinai have mostly targeted security forces and members of Egypt’s Coptic Christian minority, but mosques in North Sinai’s Sheikh Zuweid town have also been attacked.

Earlier this year, a truck bomb and a shooting killed at least 13 people. In February, hundreds of Coptic Christians fled El Arish following a series of attacks that killed at least seven people.

The constant violence on the peninsula has led to the displacement of 30,000 families, who have fled the towns of Rafah, Sheikh Zuweid and El Arish over the past two years.

“I have heard the fearful prayers for an end to terrorism, not only because of it being terrorism, but also and sometimes mainly because of the collective punishment the community has suffered since the beginning of the military campaign in 2013,” Sabry said, noting that residents have voiced their concerns and cited the need for an “actual” strategy, but to no avail.

About 550,000 people, or one percent of Egypt’s total population, live in Sinai. In the past, leaders of the country have failed to extend services to the peninsula – especially its northern half – rendering it the poorest, least-developed area.

Sarah Yerkes, a fellow at the Washington-based Carnegie Endowment for International Peace, said the new “brute force” strategy was a “quick and harsh response” to the latest attack.

“The Egyptian security forces are not well-trained or well-equipped to actually root out terror in Sinai, so even the biggest display of force will not likely be effective,” she told Al Jazeera.

In a statement issued on Thursday, the Union of Sinai Tribes – a coalition of tribal leaders in the peninsula – reiterated their support for the Egyptian military and called on residents of the area to cooperate in exchange for “moral and financial support”.

Although Yerkes says some in the region are pleased that the government is taking a strong stance against the “massive terror problem in Sinai”, others are “very concerned”.

“This use of force has already uprooted many Sinai residents, so this campaign has the potential to do a lot of harm to the local civilian population,” she said. “They need to tackle the extremist problem at its core and deal proactively with the drivers, not just react militarily to attacks.”

Allison McManus, research director at the Tahrir Institute for Middle East Policy, added that it was unclear how the new strategy would pan out.

“The suggestion to use whatever force necessary elevates concerns, as it seems to flout laws and norms on excessive use of force and best practices in countering insurgency in the long term,” McManus told Al Jazeera. “This mandate, and particularly the short timeframe given, does not give great confidence that the current strategy is taking into account best practices in countering an insurgency.”

Though the Egyptian military has claimed some success, some question whether the army has violated human rights provisions in the process.

“The previous campaigns have caused loss of life, destroyed livelihoods, and resulted in displacements across North Sinai,” McManus said.

The Sinai violence poses one of the biggest challenges for Sisi’s government. During his 2014 election campaign, Sisi vowed to implement a project that would “fully develop” the peninsula within less than two years of his election.

However, ongoing attacks cannot only be attributed to the region’s lack of access to resources, McManus said.

“The path to radicalisation is also paved with genuine belief in the righteousness of violence, feelings of marginalisation, antipathy towards the state after years of repression, and the salience of the global jihadist project,” she said.

As such, an effective strategy must include political, economic and social responses. 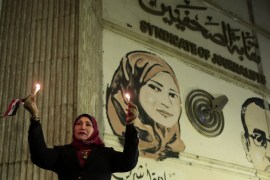 In the wake of the Sinai attack, is Egypt’s media taking cues from Sisi’s government? Plus, Mugabe’s media legacy.