United States defence secretary James Mattis has repeated a frequent US call on Pakistan to do more in its fight against armed groups operating in Afghanistan, as he concluded the latest in a series of high-level contacts between the two governments.

“The Secretary emphasised the vital role that Pakistan can play in working with the United States and others to facilitate a peace process in Afghanistan that brings stability and security to the region,” said a US statement.

“The Secretary reiterated that Pakistan must redouble its efforts to confront militants and terrorists operating within the country.”

Ties between the strategic allies have been strained since US President Donald Trump announced a new US policy on Afghanistan and South Asia in August, where he said Pakistan “often gives safe haven to agents of chaos, violence, and terror” and said his government would fundamentally change its approach to the South Asian country.

“Pakistan has also sheltered the same organisations that try every single day to kill our people. We have been paying Pakistan billions and billions of dollars at the same time they are housing the very terrorists that we are fighting,” Trump said in August.

Pakistan denies that it offers safe havens to any elements of the Afghan Taliban or the Haqqani Network, saying that is has been effectively taking on all armed groups operating in the country since the launch of a major military operation in 2014.

Since August, a series of high-level contacts between the two governments – including visits to Islamabad by US Secretary of State Rex Tillerson, US CENTCOM Chief General Joseph Votel and Trump South Asia advisor Lisa Curtis – have not yielded clarity on whether the two sides have been able to find ways to work together.

In a statement following Monday’s meeting, Pakistan’s army chief said Pakistan had done “more than its due share despite capacity constraints” in the war against armed groups.

“We have eliminated safe havens from Pakistan’s soil but are prepared to look into the possibility of miscreants exploiting Pakistan’s hospitality to the Afghan refugees to the detriment of our Afghan brothers.”

Hours after the meeting, Pakistan’s military announced it had arrested 54 Afghan citizens in the southwestern province of Balochistan and deported them. Pakistan is home to at least 1.38 million registered Afghan refugees, according to the UNHCR.

‘Threats, but no progress’

“Even if the calculus has changed a bit, that doesn’t mean Pakistan’s response will change,” he told Al Jazeera. “All countries have interests, and Pakistan has long had a deep interest in maintaining ties to non-state militant actors that are a threat to Americans in Afghanistan. Washington can demand and threaten all it wants, but at the end of the day, Pakistan isn’t going to willingly let deeply entrenched interests to be imperilled simply because the US is asking it to do so.”

Zahid Hussain, an Islamabad-based security analyst, agreed, saying that Pakistan will also be raising the issue of alleged safe havens being provided to the Tehreek-e-Taliban Pakistan (TTP), which has been waging a war against the Pakistani state since 2007, in eastern Afghanistan.

“Threats will be hurled, but I don’t think there will be much progress,” he told Al Jazeera. “But there is no option for complete rupture either. Both countries have huge stakes, and so they have to work together and find some common ground.”

The major bone of contention between the two sides is Pakistan’s alleged support for the Afghan Taliban and other armed groups operating in Afghanistan, as a hedge in any negotiated settlement that would end with those groups sharing power in Pakistan’s eastern neighbour.

“From a Pakistani perspective, it makes perfect sense to have the Afghan Taliban in their corner,” said Kugelman. “Pakistan, just like everyone else in the region, assumes that eventually, US troops will withdraw from Afghanistan.”

When that withdrawal happens, Kugelman added, there was a risk of “rampant destabilisation and civil war in Afghanistan”, and a relationship with the Afghan Taliban would be valuable for Pakistan in that context.

The question is, what can the United States do to bring Pakistan to change its behaviour, and what metrics can the Pakistani government meet to establish that they are meeting the US’ demands, as it claims it already is?

“There’s a deep disconnect here in terms of sharply divergent interests and differing expectations that says a lot about the dysfunction in US-Pakistan relations,” Kugelman said.

Analysts say the US could expand drone strikes in Pakistan as part of a punitive policy. It could also cut the $778m in defence and civilian aid that it provides the country. In August, the US withheld $255m in military spending reimbursements to Pakistan over allegations it had not acted against the Haqqani Network.

As a final step, the US could revoke Pakistan’s major non-NATO ally status. There remains, however, no clarity on which of those potential steps is on the table, both Kugelman and Hussain said.

“I do think that the Trump White House is more willing than any previous White House to go where the US has never gone before, and to swallow some of the risks involved with tightening the screws on Pakistan,” Kugelman added. 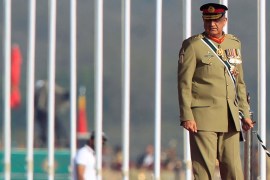 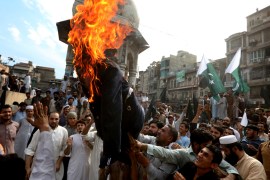 As troops deployed, analysts say key to ending the US’ longest war is navigating the rocky relationship with Pakistan. 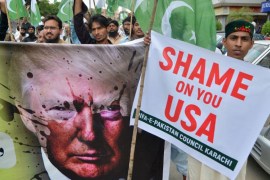