“I am very pleased to know that the GCC summit is happening, after having pushed for a resumption of that for quite some months now,” EU High Representative Federica Mogherini said on December 4, in advance of the 38th Gulf Cooperation Council (GCC) summit hosted by Kuwait on December 5.

Al Jazeera examines the differences and similarities between the two.

Why was it founded?

Where is it based?

How are disputes solved? 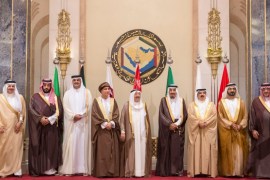