By Anna Nigmatulina and Alia Chughtai

Nearly a dozen princes and tens of prominent businessmen and officials were dismissed and detained in Saudi Arabia in an investigation by a new anti-corruption committe headed by Crown Prince Muhammed bin Salman. The detained princes, who are all cousins, include prominent businessman and biollionaire Prince AlWaleed bin Talal. Only five of the royal family members have been named.

The allegations against the detained reportedly include money laundering, bribery, extorting officials and taking advantage of public office for personal gain. 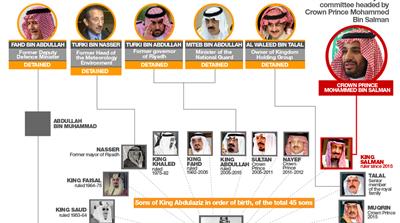