The Qatar-based International Union of Muslim Scholars has launched a campaign in solidarity with imprisoned Palestinian political leader Raed Salah.

The campaign, launched on Monday, is being led by activists in Palestine, Lebanon, Jordan and Turkey to call for his release and an end to oppressive Israeli policies in Jerusalem.

As part of the launch, Yusuf al-Qaradawi, a prominent religious leader in the region, will be giving a speech in the Turkish city of Istanbul on Monday evening.

The acts of solidarity include sit-in protests, conferences, and an awareness campaign on social media under the banner “We are all the Sheikh of al-Aqsa” (#كلنا_شيخ_الأقصى).

Yunus Abu Jarad, the media coordinator for the campaign, says that the decision to launch the movement at this time is linked to the successful Palestinian uprising in Jerusalem in July.

After two weeks of civil disobedience and protests, Palestinians managed to pressure Israel to remove restrictive measures, including cameras and metal detectors, at the entrances to al-Aqsa Mosque compound.

“Since the last uprising in Jerusalem … the Zionist occupation has been targeting Palestinians, banning them from entry to al-Aqsa and arresting them. Things are happening every day in Jerusalem and no one is paying attention to it,” Abu Jarad told Al Jazeera from Istanbul.

After the mass protests, Israeli forces embarked on mass arrests in East Jerusalem and the West Bank, detaining more than 1,200 Palestinians – the highest number in years.

“Sheikh Raed Salah is the icon of al-Aqsa. Until now, they [Israel] has not found a clear accusation or charge against him – they merely want to shut him down,” said Abu Jarad, adding that Salah’s arrest is not just a Palestinian issue, but an Islamic one as well.

Social media users participating in the campaign have been using slogans such as: “We welcome imprisonment if it means defending al-Aqsa.”

Another user said: “The only person who, if you mention his name, you remember al-Aqsa. He has become a symbol of al-Aqsa – his freedom would be a victory for al-Aqsa”.

The political and religious leader was arrested from his home on August 15 in the northern town of Umm al-Fahm on charges of “inciting violence” and supporting a banned organisation.

The Israeli justice ministry accused Salah of issuing “expressions of praise, sympathy or encouragement for an act of terrorism” at a funeral for two Palestinians who carried out an attack against Israeli forces at al-Aqsa Mosque compound on July 14.

But Salah has denied the charges, saying that his sermons are centered on Quranic verses and the Israeli occupation, in line with the fundamentals of free speech meant to be protected by Israel, which says it is a democratic state.

The former mayor of Umm al-Fahm, who holds an Israeli passport, has been imprisoned by Israel several times in the past. His organisation, the northern branch of the Islamic Movement, was banned in 2015.

His political activism in calling for Palestinians to guard al-Aqsa, providing transportation for them to the mosque, and holding annual rallies to raise awareness, have made him a well-respected figure across the spectrum.

Israel occupied East Jerusalem, which hosts the al-Aqsa Mosque, in 1967. The state illegally annexed the area shortly after, claiming that the city – east and west – is its eternal, undivided capital.

The annexation violates several principles under international law, which outlines that an occupying power does not have sovereignty in the territory it occupies.

But Israeli forces often restrict the entry of Palestinians to the holy mosque, while escorting religious Jews to the site.

With his trial ongoing, Salah remains in prison. An Israeli court recently rejected his appeal to be released until the legal proceedings are over.

Omar Humeisi, one of Salah’s lawyers, says that the Israeli court is purposely taking its time with Salah’s case and that it is “unrealistic to keep him in detention all this time”, adding that he expects the case to go on for at least a year at this rate.

“This issue is much bigger than Israel’s charges against him. It was a political move to imprison him. It highlights the issue of discrimination against the Palestinian citizens of Israel. Why is it that when Jews incite against Palestinians, they are not arrested?” Humeisi asked.

On numerous occasions, Israeli politicians have fuelled hatred of Palestinians and incited violence against them in public but have not faced any consequences.

In March 2015, Avigdor Lieberman, Israel’s defence minister, said Palestinian citizens of Israel who oppose the state should have their heads cut off.

In July 2014, Israel’s justice minister, Ayelet Shaked, said Palestinian mothers should be killed because they give birth to “little snakes”, and she labelled the “entire Palestinian people” as “the enemy”.

And in a speech to the World Zionist Congress in 2015, Israeli Prime Minister Benjamin Netanyahu claimed that Adolf Hitler had no interest in exterminating the Jews of Europe until a Palestinian convinced him to.

Also, on the 1967 anniversary of Israel’s occupation of East Jerusalem, right-wing nationalist Israelis freely rampage around the Old City under the protection of Israeli forces, carrying Israeli flags and shouting anti-Palestinian, anti-Muslim slogans such as “Death to the Arabs”.

Back in Istanbul, Abu Jarad from the campaign to release Salah says the main message of the movement is to tell Israel: “We are aware of the actions you’re taking and we won’t let you isolate Palestinians. We won’t let you humiliate Sheikh Raed Salah, the symbol of Jerusalem.” 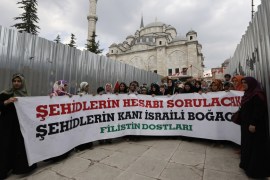 Youth from 30 countries take part in two-day conference aimed to show solidarity with the Palestinian people. 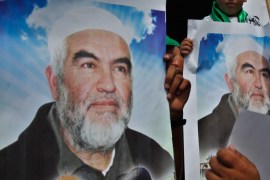 Lawyer to lodge appeal after Israeli court denies bail for the leader of the northern branch of Islamic Movement.