Residents told Al Jazeera that bombs “rained down” on several neighbourhoods of the capital on Sunday, targeting a stage in al-Sabeen square used by Houthi rebels for military parades, the nearby presidential palace, the national security headquarters and the interior ministry.

The Houthi-run Saba news agency reported more than 15 air strikes in Sanaa and a further 14 in the districts of Sinhan and Bani Bahloul.

Fatik al-Rodaini‏, an activist based in the capital, told Al Jazeera some of the raids aimed at Sanaa’s old city, a UNESCO world heritage site.

“This is the worst day I’ve experienced since the start of the war,” Rodaini said.

“I am fearing for my children’s lives. They haven’t gone outside all day. Just a few minutes ago I was thinking of letting them run to the shops but we heard another loud explosion and my wife said ‘no’.

“The Saudis don’t care about our children, our future, our lives. They know that civilians live in close proximity to government buildings yet they continue to target those areas – they just don’t care.”

Hours earlier, the Saudi military confirmed intercepting a ballistic missile that was fired from Yemeni territory towards the kingdom.

Colonel Turki al-Maliki said Saudi forces intercepted the ballistic missile with a surface-to-air Patriot missile, which caused it to shatter into fragments in an “uninhabited area” east of Riyadh’s King Khalid International Airport.

The Houthis – a group of rebels who control Saada province, the capital Sanaa, as well as other parts of central Yemen – claimed responsibility for the attack, vowing to target the capitals of all Arab countries that are bombing the country.

“Riyadh slept in peace and comfort last night due to the efforts of the Saudi armed forces,” al-Maliki said.

“We will continue to target the Houthis and their missiles that are sponsored by the Iranians,” he added.

In an interview with Al Jazeera earlier this month, Mohammed Abdul Salam, a spokesman for the Houthi rebels, threatened to escalate operations on the Yemeni-Saudi border and target deep inside the kingdom.

“The Saudis started the war. Our response will continue and increase, whether it’s targeting deep inside Saudi Arabia, targeting military positions where Saudi jets fly from, or military bases inside Yemeni territory,” Abdul Salam said.

“Abu Dhabi and others that target Yemen are – as far as we’re concerned – a fair military target. Any country that targets Yemen will be struck by our missiles.”

Yemen, which sits on the southern edge of the Arabian Peninsula, has been engulfed in war since September 2014, when Houthi fighters swept into the capital and overthrew President Abd-Rabbu Mansour Hadi’s internationally recognised government.

Concerned by the rise of the Houthis, believed to be backed by regional rival Iran, Saudi Arabia and a coalition of Sunni Arab states launched an intervention in 2015 in the form of a massive air campaign aimed at reinstalling Hadi’s government. 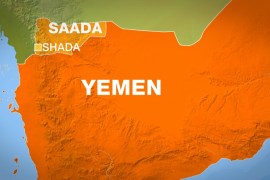