New York City, New York – Claims that left-wing activists and anti-fascists (also known as “Antifa”) planned to “behead white parents” and deploy “super soldiers” as part of a bid to launch a civil war turned out to be a series of modest anti-Trump marches in cities across the country.

Saturday’s demonstrations and marches, which took place in several US cities and largely passed without incident, had been billed by far-right websites as plans to carry out mass bloodshed and execute a coup against right-wing President Donald Trump.

RefuseFascism.Org, a left-wing protest group, called for the rallies to “drive out” the Trump administration, sparking a storm of far-right conspiracy theories about anti-fascists’ alleged plans to start a civil war in the country.

A day before the rallies, Fox News dubbed the events the “Antifa apocalypse”, while far-right forums claimed that leftists planned to indiscriminately murder white people on Saturday.

But the rallies were a far cry from the conspiracy theories that had gone viral on far-right websites, with some 300 people assembling in New York City and dozens rallying in places like San Francisco, Los Angeles, Austin and Portland, among others.

“They cooked up a conscious lie talking about violence,” he said. “We said from the beginning this was going to be a non-violent protest.”

“I am sexually attracted to indictments,” another sign said.

A handful of pro-Trump hecklers milled around the march, chanting back occasionally, and a brief altercation between a left-wing march participant and a counterdemonstrator was broken up by police.

Although RefuseFascism.Org considers itself an anti-fascist group, the organisation is linked to the relatively small Revolutionary Communist Party and is not tied to Antifa chapters and groups that have been clashing with far-right protesters.

The rumours surrounding the rallies first went viral after InfoWars, a conspiracy theory website headed by Alex Jones, published a story under the title: “Antifa plan civil war to overthrow Trump on November 4”.

After InfoWars ran that story, far-right websites claimed that Antifa “super soldiers” planned to take to the streets and wage chaos and bloodshed.

Daryl Lamont Jenkins, an anti-fascist researcher and founder of the One People’s Project, said that the far right has a long history of spreading misinformation about left-wing protests.

Just weeks before that, armed militia members and other far-rightists showed up for a counterprotest in Houston, Texas, after a hoax Facebook page announced that left-wing activists intended to tear down a statue of Sam Houston, a political leader and military figure who fought for the independence of Texas and later advocated the territory becoming a US state.

“This is what defines the far right,” Jenkins told Al Jazeera, describing the conspiracy theories about a civil war on Saturday as “a sign of desperation”.

He said: “They’ve decided to create their own world, and we’re just living in it for some reason. It’s downright pathetic.” 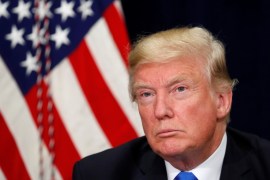 From internal party warfare to the country’s opioid crisis, Al Jazeera looks back at the US president’s week. 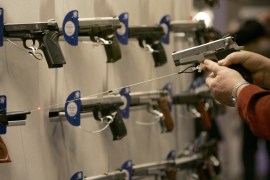 Guns, the NRA and Donald Trump 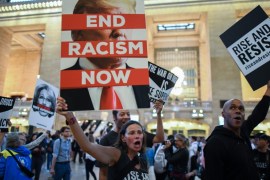 Is President Trump to blame for a rise in hate crimes?

The Southern Poverty Law Center says there has been a spike in hate crimes in the US since last year’s election.