Shortly after Slobodan Praljak – the convicted Bosnian Croat war criminal who drank poison in a Hague courtroom on Wednesday upon confirmation of his 20-year jail term for crimes committed during the Bosnian War – killed himself on live television, messages posted on social media mirrored divided public opinion in the Balkans.

For some, this was the final desperate act of a selfish villain; for others, that of a wrongly accused hero.

Journalist Amer Obradovic, who as a teenager suffered horrors in a prison camp run by Croatian Defence Council (HVO) soldiers under general Praljak’s command, wrote on Twitter: ”People who were with me in the camp survived the most horrific torture, but none of them took their own life. Camp detainees are brave people. And these ‘great army leaders’ and generals are mere cowards.”

Others saw Praljak as a ”hero” – with this tag being tweeted even by some Croatian TV journalists.

By the evening, mass was held in Catholic churches in several cities across Praljak’s native Herzegovina. On Thursday, Croatian President Kolinda Grabar-Kitarovic, who returned to Zagreb having cut short a trip to Iceland, spoke of Praljak as ”a man who preferred to give his life, rather than to live, having been convicted of crimes he firmly believed he had not committed. His act struck deeply at the heart of the Croatian people and left the International Criminal Tribunal for the Former Yugoslavia with the weight of eternal doubt about the accomplishment of its tasks”.

Praljak took his life on the final day of deliberations for the ICTY on November 29, celebrated in the former Social Federal Republic of Yugoslavia as Republic Day.

Who was Slobodan Praljak, the former HVO general in the wartime statelet of Herzeg-Bosnia, self-proclaimed in parts of Bosnia and Herzegovina during the 1992-1995 war?

Praljak was born on January 2, 1945, in Capljina, in Bosnia and Herzegovina’s south, close to the Croatian border.

His father, Mirko, was a state security official in former Yugoslavia after World War II.

Slobodan Praljak attended high school in Siroki Brijeg near Capljina. For six years, he was in the same class as Gojko Susak, later the Croatian defence minister.

Praljak completed his tertiary education in Zagreb, Croatia, gaining three university degrees in the early 1970s – Bachelor of Electrical Engineering, Bachelor of Philosophy and Sociology, as well as Directing at the then Academy of Dramatic Arts.

He started his career as manager of the electronics laboratory at the Nikola Tesla Vocational High School in Zagreb and later worked as a theatre and TV series director. In 1989, he directed a feature film.

After a short foray into politics, in September 1991, four months into the war in Croatia, Praljak volunteered to go to Sunja, near Sisak in central Croatia, where he headed defence operations.

He became a Croatian Army colonel in November 1991. By the following year, he was a brigadier and assistant to the defence minister.

In April 1992, he volunteered to go to southeastern Herzegovina to be a commander in the area spanning his native Capljina, Mostar, Jablanica and Konjic.

On his request, he was relieved of his duties in the Croatian Army and became an HVO general in Bosnia and Herzegovina in July 1993. HVO comprised mostly Bosnian Croats.

He returned to the Croatian Army in November 1993, where he held various positions, one of which was as head of former Croatian President Franjo Tudjman’s military cabinet.

According to ICTY, Praljak was the key link between the political leaders of the Republic of Croatia and the leaders of the internationally unrecognised breakaway statelet of ”Herzeg-Bosnia”, which formed part of a joint criminal enterprise.

His conviction and jail term were upheld on appeal alongside those of other Bosnian Croat leaders – former “Herzeg-Bosnia” prime minister Jadranko Prlic and four others.

The ICTY Appeals Chamber found that an international armed conflict and a state of occupation took place during the 1992-1995 war in Bosnia and Herzegovina. It upheld the existence of a joint criminal enterprise aimed at ethnically cleansing parts of Bosnia and Herzegovina of Muslims in order to annex Herzeg-Bosnia to Croatia. It also found that Croatia’s first president, Franjo Tudjman, was part of the joint criminal enterprise.

Bosnia and Herzegovina Presidency member Bakir Izetbegovic earlier said The Hague Tribunal had put ”an international stamp on the dark side of the truth about the formation and actions of ‘Herceg Bosna'”.

He said Croatian politics created in Zagreb and Bosnia and Herzegovina were two-faced.

”One was the failed joint criminal enterprise which led to horrific suffering… The other, bright face of Croatian politics fought for the end of conflict, looked after expelled Bosniaks during wartime … and enabled the Army of the Republic of BiH and HVO to fight side-by-side until the end of the war.”

The Croatian Parliament on Thursday held a minute’s silence for Praljak. MPs from the opposition Socialist Democrats and the Civic Liberal Alliance (GLAS) did not attend. Former Croatian foreign minister and GLAS MP Vesna Pusic received death threats for criticising ”wrongful Croatian politics of the 1990s”.

”Yesterday in The Hague, a sentence was neither passed to the Republic of Croatia, nor Croats in Bosnia and Herzegovina. Croatia was not an aggressor,” said President Kolinda Grabar-Kitarovic.

”[Former Serbian president Slobodan] Milosevic’s Serbia and the Yugoslav National Army attacked Croatia and Bosnia and Herzegovina, and those are notorious facts. Croatia did not attack anybody.”

The Mechanism for International Tribunals in The Hague is yet to rule on the retrial of former Serbian State Security Chiefs Jovica Stanisic and Franko Simatovic, accused of war crimes and crimes against humanity committed in Croatia and Bosnia and Herzegovina.

One of the key parts of the indictment deals with a joint criminal enterprise that included former Serbian President Slobodan Milosevic and others. 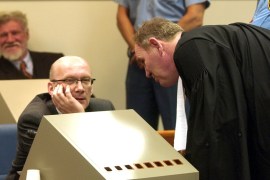 Prosecutors say Jadranko Prlic should get 40-year sentence for his role in the deaths of Bosnian Muslims during the war. 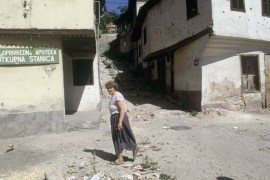