“The reality clearly shows that the gangster-like US imperialists are the very one who is aggravating the situation of the Korean Peninsula and seeking to ignite a nuclear war,” the official Korean Central News Agency said on Friday.

The report also highlighted that three US aircraft carrier strike groups are converging off the peninsula in advance of US President Donald Trump’s visit to the region starting on Sunday.

Trump’s talks in Japan, South Korea, and China will focus heavily on the alleged threat posed by North Korea, which continues to progressively expand its nuclear and missile programmes.

“The US imperialists are making last-ditch efforts to check the dynamic advance of the DPRK by deploying their nuclear strategic assets in succession, but its army and people are never frightened at such moves. The US imperialist warmongers should not act rashly,” KCNA warned, using the acronym for North Korea’s official name, the Democratic People’s Republic of Korea.

On Thursday, the supersonic stealth bombers flew from an American base in Guam to conduct the exercise, the US Air Force said in a statement.

“The bilateral continuous bomber presence mission was planned in advance … and was not in response to any current event,” it said.

The United States has said it will never accept a nuclear-armed North Korea and Trump has threatened to “totally destroy” the country if it threatens the US or its allies.

In response, Kim Jong-un‘s government said it might conduct an atmospheric nuclear weapons test, which would be a first after six underground detonations.

Some analysts suggest Pyongyang could test more intercontinental ballistic missiles (ICBMs) during Trump’s trip in a show of defiance, or even a nuclear device.

North Korea tested its most powerful nuclear weapon yet in September in an underground detonation. It has launched a spate of ICBMs in recent months, drawing the ire and sanctions of the international community.

“The president recognises that we’re running out of time,” he told reporters. Trump will attempt to “convince its leaders that the pursuit of nuclear weapons is a dead end”.

“And he will remind friend and foe alike that the United States stands ready to defend itself and our allies using the full range of our capabilities,” said McMaster. 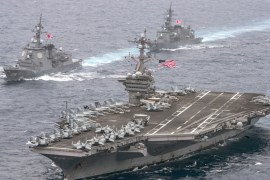