Srinagar, Indian-administered Kashmir – The state-run human rights commission has told the government in Kashmir to investigate at least 2,080 unmarked mass graves discovered in border areas of the restive region.

The Association of Parents of Disappeared Persons (APDP), a human rights group in Kashmir, told the commission there were 3,844 unmarked graves – 2,717 in Poonch and 1,127 in Rajouri, twin districts in the region that lie along Line of Control (LoC) that divides the disputed territory between India and Pakistan.

In response, the commission acknowledged the presence of 2,080 unmarked graves and asked the government for a comprehensive investigation to be completed in six months, including DNA tests of the bodies to compare it with family members of the disappeared.

In 2011, the commission directed the government to investigate the mass graves. At the time, a special team from the commission said 2,730 unidentified bodies were buried in 38 sites across northern Kashmir.

“The commission has no hesitation to issue the same directions, which were already issued in the case,” the recent order said.

APDP maintains 8,000 people have disappeared in the decades-old conflict, and accuses government forces of staging gun battles to cover up killings.

“It is an acknowledgement from the institution that is run by the government. It provides further legal remedies for the family members of missing,” Khurram Parvez from APDP told Al Jazeera.

“We have been demanding that there be an independent commission to do a credible probe on the mass graves.”

Parvez said the probe might give an “answer” to families of disappeared who do not know whether their relatives are dead or alive.

“We have done a study of 53 cases for a report where the bodies were exhumed from unknown graves. It was found that 49 bodies in the graves were of civilians and one was a local militant, three bodies were unknown. These people were dubbed as foreign militants by the government,” Parvez said.

Since 2011, instead of complying with directions from the human rights commission, the government continues to avoid such an investigation on the pretext it would lead to a “law and order problem” in Kashmir, APDP said in a statement.

The European Parliament adopted a resolution in July 2008 and called on India’s government ensure independent and impartial investigations into all mass graves, APDP said.

Officials contacted by Al Jazeera declined to comment on Friday.

The state government has said most of the missing were likely Kashmiri youths who crossed into Pakistan for weapons training. Those comments have been dismissed by family members of the disappeared.

Tahira Begum, 39, from Baramulla whose husband disappeared in 2002, said if the government investigates the graves it would provide “emotional closure” to family members.

“We want to know whether our family members are buried in these graves. At least, we will get an address to mourn,” she told Al Jazeera.

Tahira said she had to leave her three sons in an orphanage after her husband disappeared.

“My kids would run from school and ask me where their father is. For years, I told them he has gone for work outside. But as time passed, I couldn’t lie to them any more.”

Her husband disappeared after leaving home for work and never returned. “I went everywhere to look for him but failed. I just want an answer – what happened to him,” she said.

Nearly 70,000 people have been killed in the uprising and the ensuing Indian military crackdown. India maintains about 500,000 soldiers in the territory.

Anti-India sentiment runs deep among Kashmir’s mostly Muslim population and most support rebels against Indian rule despite a decades-long military crackdown to fight the armed rebellion.

India has accused Pakistan of arming and training the rebels, allegations that Pakistan denies.

Rebel groups have largely been suppressed by Indian security forces in recent years, and public opposition to Indian rule is now principally expressed through street protests. 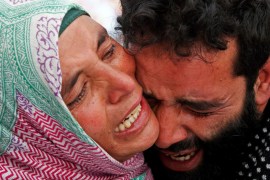 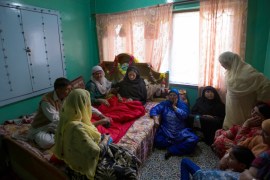