Kuala Lumpur, Malaysia – Tucked away upstairs at a shopping plaza in this city’s north end is a small storefront turned classroom for dozens of Rohingya women and children.

The sound of these women reciting English phrases, laughing and the occasional cries of kids can be heard in the stairwell.

Its founder, Sharifah Husain, 24, said she wanted to do something to help women and children in her community, who are not allowed to work or study in Malaysia.

“I noticed we didn’t have a Rohingya women’s organisation that was standing up for women – to be the voice of women,” Husain said.

Husain comes from Buthidaung village in Myanmar’s restive Rakhine state. Her father fled to Malaysia when she was 5 years old, fearing for his life. Husain was left behind with her mother and two younger siblings.

The village was attacked soon after, so Husain’s mother took them to Yangon, the former capital of Myanmar – then known as Burma.

Her recollection of the traumatic moment when a local mob attacked her village is hazy. It took place almost 20 years ago.

Rohingya refugees: ‘I do not hope to return’

But it mirrors the accounts of Rohingya refugees now in Bangladesh, who’ve recently fled the Myanmar’s army clearance operations and local Buddhist mobs.

“My mother was arrested in Yangon and sentenced to prison for not having official [identification or travel] documents,” Husain recounted. “This left me in charge.”

Husain can’t remember how long she spent in Yangon, but she said she was separated from her siblings and sent north to Mandalay and forced into servitude.

She spoke to her father in Malaysia, over the phone, and he agreed to pay human traffickers to bring Husain and her siblings to Kuala Lumpur, Malaysia’s largest city. All three, including Husain, were smuggled by land, into Thailand and Malaysia.

At that time the Southeast Asia trafficking route wasn’t as defined as it is today. Human trafficking groups in Bangladesh and Thailand now make a lot of money off of poor, desperate refugees fleeing war and violence in Myanmar.

Today, the concern faced by the Malaysia government is if it recognises its refugees then that could send a signal to make the perilous journey, now taken by sea from Myanmar and Bangladesh, to sanctuary in Malaysia, where they don’t face violent persecution.

The UN refugee agency, UNHCR, states there are 152,170 registered refugees in Malaysia. The majority are Rohingya, displaced from their homes in Myanmar, like Husain.

But the amount of unregistered refugees varies widely from 40,000 to 140,000, according to Asylum Access Malaysia.

“The big question is – when are the boats going to come? There’s no indication they will now, but there’s definitely a high possibility that they will. And once new groups arrive, that complicates [the] situation,” said Deepa Nambiar, Asylum Access Malaysia director.

UNHCR runs what it calls a “parallel school system” for refugees in Malaysia, allowing children to access basic, primary-level education.

Refugee groups and local faith-based organisations fund these schools, staffed by volunteers. One-hundred and twenty-eight informal refugee schools in Malaysia access funding from the UN. It provides education to 7,154 children, according to UNHCR.

Malaysia’s Prime Minister’s Office states 16,809 Rohingya refugee children are registered with UNHCR. This means about 10,000, or more, refugee children in Malaysia are unable to access any form of education.

A dozen or so more informal refugee schools exist but rely solely on donations and are understaffed, said Asylum Access.

“To live in Malaysia, yes you can live, but you don’t have a future. You are in a box. You can’t go out of the box,” Husain said.

Husain has received no formal education in Malaysia. This is remarkable considering her drive to educate refugee women and children. Malaysians are supporting Rohingya Women’s Development Network by volunteering as teachers and support staff.

Rohingya Women’s Development Network started officially last year. But Husain has spent the last decade educating her community’s most vulnerable women and children in their own homes.

“I have built up a trust. The men especially trust me. They feel safe sending their wives to our centre because they know me,” Husain said.

Husain is trying to change the mentality in the Rohingya and wider refugee community in Malaysia, that women and girls can’t study, work, or earn an income. She receives some funding from UNHCR to run programmes but uses her own money to keep them going.

“Of course I have support from my family. My father is my hero. My husband is my hero. Both of these men have really pushed me forward,” Husain added.

The Rohingya Women’s Development Network has teamed up with Asylum Access Malaysia on a refugee theatre project. This will allow refugee women to educate the community on issues of sexual violence.

“What I think is so innovative about Sharifah and the team is that when we were discussing this project they said ‘we need to get men involved’,” Nambiar said.

Husain is appealing to others in the refugee community to support initiatives set up by the Malaysia government and civil society groups to help Rohingya women and children displaced in Bangladesh’s refugee camps.

“I am trying to build an orphanage in Bangladesh to protect the children exposed to child trafficking,” Zuriana said. “We are trying to fundraise to build a proper orphanage with a school inside. They will be protected and receive education.”

To raise awareness of the plight of Rohingya women and children fleeing the atrocities in Myanmar to Bangladesh, the Rohingya Women’s Development Network is selling beaded jewellery made during class.

Despite the Malaysian government’s commitment to provide vital aid and healthcare to Rohingya refugees in Bangladesh, some in Malaysia say they’re also desperate and in need.

To improve the situation, Malaysia has launched a pilot project giving jobs to selected refugees. This, refugees hope, will pave the pathway to citizenship in Malaysia.

“It’s no different. In Myanmar they have been suffering. When they are outside of Myanmar, they come to Malaysia and expect something better. Things are not getting better,” Husain said. “They just escape death. But they’re still suffering here because they don’t have any rights.”

Asylum Access Malaysia’s director Deepa Nambiar said Rohingya refugees in Malaysia do receive a lot of sympathy, but not enough is done to help them integrate or assimilate.

“If we can be in a place where Rohingya women are educated, aware of their options, empowered to speak out, engage with NGOs [non-governmental organisations] and partners [and] the government,” Nambiar said. “We have the right environment to do it in Malaysia.”

Husain said she believes the true function of Rohingya Women’s Development Network is to educate the community on its history – where it comes from and why it has been displaced all over Southeast Asia, and the world.

“We cannot destroy our [own] identity. If we do that, it’s very easy for Myanmar to say ‘they are really Bengali,’ I’m not Bengali!” Husain exclaimed.

“The younger generation needs to know who we are so we can fight for our rights.” 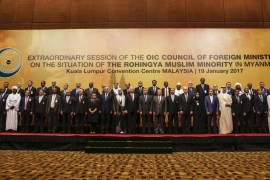 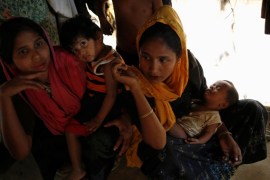