Lebanese Prime Minister Saad Hariri has said that the events that unfolded over the past three weeks of his time in Saudi Arabia will remain undisclosed, emphasising that he does not wish to discuss the details of what happened to him during that period.

In an interview with French channel CNews on Monday, Hariri said he wanted to bring about a “positive shock” on the Lebanese people through the announcement of his resignation, stressing that there was no pressure on him to resign from Saudi Arabia.

Hariri had announced his resignation on November 4 from the Saudi capital Riyadh, but deferred his decision on November 22, when he returned to Lebanon after visiting France and Egypt.

In a televised speech, Hariri blamed interference in Lebanon by Iran and its Lebanese ally, the Hezbollah movement, for his decision to resign, adding that he feared an assassination attempt.

Referring to Hezbollah, Hariri said: “Iran’s arm … has managed to impose a fait accompli on Lebanon through the power of its weapons.

“They have built a state within a state.”

Iran and Saudi Arabia are fighting proxy wars in the region, from Syria to Yemen. Iran is a predominantly Shia military and economic power, while Saudi Arabia is a Sunni bloc leader.

Saudi Arabia blames Iran for backing armed groups throughout the Arab world and has recently pledged to fight them.

Hariri’s resignation spurred a debate over whether he was forced to resign.

Officials in Lebanon had alleged that Hariri was being held hostage by Saudi authorities, an allegation Hariri denied in his first public statement following his resignation speech.

In his interview with CNews, the premier said he would resign if Hezbollah does not agree to change the status quo in the country.

Hariri is part of a unity government that includes members of Hezbollah, which has a strong military wing based in the country’s south.

He assumed a second term as prime minister in December 2016, in a power-sharing government headed by President Michel Aoun, a supporter of Hezbollah, whose members have been accused by the International Court of Justice of assassinating Hariri’s father, Rafik, in a 2005 bombing.

The country spent two years in political deadlock, without a president, before Aoun’s election in October 2016, after Hariri endorsed the latter, a move seen by some analysts as a sign of Iran’s influence in Lebanon.

Hassan Nasrallah, the leader of Hezbollah, said he was sure Hariri was forced to resign as part of what he called Saudi Arabia’s policy of stoking sectarian tensions in Lebanon. 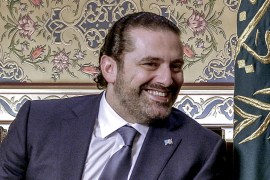 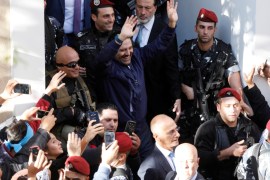