About 25,000 tonnes of wheat has arrived in Yemen, the second batch of food aid that has been allowed into the country since the Saudi-led coalition imposed a blockade nearly three weeks ago.

A spokesperson for the World Food Programme (WFP), Abeer Etefa, said the shipment landed on Sunday at the Houthi rebel-controlled Red Sea port of Saleef in western Yemen.

The Saudi-led coalition battling Houthi fighters imposed the siege on Yemeni ports and airports in response to a ballistic missile they fired at the Saudi capital, Riyadh, which was shot down earlier this month.

UN officials have warned that Yemen could face the world’s largest famine in decades unless the crippling blockade by the coalition is lifted. The impoverished Middle Eastern country is highly dependent on imported wheat.

Saleef port is 70km north of the key port of Hudeida, also on the Red Sea and in rebel hands. Hudeida Port is the main conduit for UN-supervised deliveries of food and medicine but has been blocked by the Saudi-led coalition for weeks.

According to an official who heads operations at the port, the ship, sent by the WFP, was carrying “flour and relief materials weighing 5,500 tonnes”.

“This is not enough for the Yemeni people’s needs, but we hope this is a good sign to open the port of Hudeida and lift the siege in all Yemeni provinces,” the official told reporters on Sunday.

On Saturday, about 1.9 million doses of vaccines were also flown into Yemen, a UN children’s agency official said on Sunday.

UNICEF director Geert Cappelaere told reporters in Jordan‘s capital, Amman, that more than 11 million children in Yemen are in dire need of aid.

It is estimated that every 10 minutes a child in Yemen dies of a preventable disease, he added.

“Today it is fair to say Yemen is one of the worst places on Earth to be if you’re a child. The war in Yemen is sadly a war on children. Yemen is facing the worst humanitarian crisis I have ever seen in my life,” Cappelaere said.

The UN has listed Yemen as the world’s worst humanitarian crisis with 17 million people in need of food – seven million of whom are at risk of famine.

More than 2,000 Yemenis have died in a cholera outbreak now affecting nearly one million people.

Yemen’s civil war has raged since 2015 when the Houthis stormed the capital, Sanaa, and deposed the government of President Abd-Rabbu Mansour Hadi.

Since then the Houthis have been dislodged from most of the country’s south, but remain in control of Sanaa and much of the north. 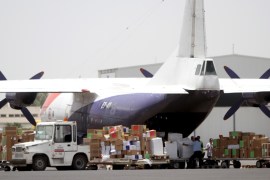 US calls for ‘additional steps’ to end Yemen blockade

Saudi-led coalition has shut air, land and sea access to country, saying it will halt arms from reaching Houthi rebels.