By Nick Rodway and Grace Dungey

Brisbane, Australia – Coral bleaching and the effects of climate change on the Great Barrier Reef have drawn international focus, but another threat has emerged to one of the world’s most famous natural wonders – the systematic clearing of native bushland.

The east coast of Australia is considered a “global front” for deforestation – ranked alongside Brazil and Democratic Republic of Congo – with one of the highest rates of land-clearing in the world.

Predominately utilised for pasture, 1.4 million hectares of remnant vegetation has been cleared since 2010. Last month, a government report revealed 395,000 hectares of land were deforested between 2015-16 alone.

Environmental experts have warned if these numbers continue unabated the natural landscape of the region risks irreversible damage.

Associate Professor Martine Maron, deputy director of the Centre for Biodiversity and conservation science at the University of Queensland, explained to Al Jazeera just how damaging the effects of land-clearing can be to reef systems.

Due to a process known as “gully erosion”, sediment from cleared zones is released into catchment areas and flushed into the Great Barrier Reef lagoon.

Maron highlighted the sedimentation “reduces the health of corals and seagrass” by blocking out sunlight and preventing coral growth. In high volume, such sediment can affect the resilience of the reef and “its ability to recover from bleaching events”.

In essence, sedimentation smothers coral by hindering its ability to photosynthesise.

Sharing Maron’s concerns is Queensland state’s Environment Minister Steven Miles, who described the current rates of deforestation as “nothing short of catastrophic”.

Miles underscored the need for legislation to combat rampant land-clearing, adding he favours incentive policies that would encourage landholders to avoid land-clearing and to re-vegetate riparian zones.

“It is very much about reducing our carbon emissions, but also delivering habitat benefits for the Great Barrier Reef,” he told Al Jazeera.

In August 2016, Miles and his Labor Party colleagues attempted to introduce such reforms, but were blocked in the state parliament by the Liberal National Party (LNP) in coalition with crossbench members. If Labor returns a majority vote during Queensland elections on Saturday, Miles confirmed the party will revisit the legislation.

However, there continues to be resistance to these reforms. The LNP has stated it will continue to oppose any land-clearing changes, arguing it would “stifle production … put a tight lid on development … and undermine farm investments”.

Similarly, the conservative One Nation party has pledged to abolish all land-clearing protections, arguing such legislation hinders the work of farmers.

Farming is integral to Queensland’s economy. The state is Australia’s biggest exporter of beef products, but also has the second-highest unemployment rate in the country and is in severe debt, with economists warning it may top $80 billion Australian dollars ($61bn) in 2018.

As a result, conservative members of the Queensland parliament want to retain jobs in farming areas. This was a point highlighted by Prime Minister Malcolm Turnbull this week, who endorsed the need for “jobs and growth” for Queensland at LNP’s election campaign launch.

As the debate over deforestation clearly shows, management of the Great Barrier Reef falls within both state and federal jurisdictions.

As it is the federal government that is a signatory to World Heritage Conventions, Miles said the role of his federal counterparts is to “assure the global community” that Australia is meeting its obligations for the reef’s well-being.

“Laws are already in place in Queensland prohibiting land-clearing,” which seek to improve water quality and prevent sediment runoff.

The minister’s spokesperson added these measures have proven effective, referencing The Great Barrier Reef Report Card 2016 that shows there is “less pollution flowing to the Reef”.

But critics point out there are still significant swaths of bushland set aside for clearing.

The Wilderness Society, in conjunction with the World Wildlife Fund, published a joint analysis that concluded a further 1.02 million hectares of land has been earmarked for deforestation in Queensland.

The figures indicate the rate of proposed clearing could be an average of 850,000 hectares a year.

Jessica Panegyres from The Wilderness Society described this as a “national disgrace”.

Speaking to Al Jazeera, Panegyres highlighted that cattle grazing “is the number one driver of deforestation in Australia”. Given that 93 percent of cleared land was used for pasture last year, it is reasonable to assume this trend will continue, she said.

“Some of the biggest food companies in the world have made individual commitments to have zero deforestation in their supply chains,” she noted.

To reduce environmental pressures on terrestrial and marine environments, Panegyres said sustainable practices may need to be implemented by industry and both federal and state governments.

“It has become clear to governments and industry that if we’re going to continue growing food in 50 years’ time, we need to look after the land now,” she said.

“We will continue to see pressures on the reef intensify if land clearing continues at the very time we need to be protecting it against every additional threat that we can,” said Maron. 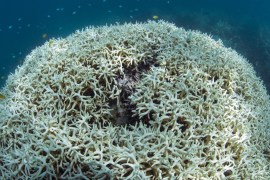 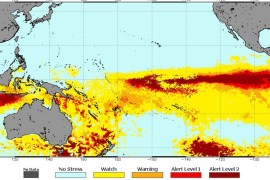 A combination of warming ocean waters and a major El Nino event highlights just how sensitive are coral reefs.