Harare, Zimbabwe – On Wednesday, two weeks after fleeing to South Africa, a beaming Emmerson Dambudzo Mnangagwa emerged from his car to the thundering chants of “Garwe! Garwe! Garwe!”.

The roar only grew louder as the 75-year-old later took to the stage to address the cheering crowds.

“Today, we are witnessing the beginning of a new and unfolding democracy,” he told the thousands who had gathered to welcome home the man they believe can take Zimbabwe into a new era.

Popularly known as “Garwe“, or crocodile in Shona, after his days as a member of the 1960s Crocodile Gang that waged anti-colonial resistance acts against the white minority regime of the time, Mnangagwa is set to become Zimbabwe’s second leader and third president since independence in 1980.

Mnangagwa – also known as “Ngwena” (a totemic name for a crocodile) or “E.D.”, after his initials – has long been seen as the man most likely to replace his mentor and Zimbabwe’s longtime leader, Robert Mugabe.

But things took a different turn as factional battles within the ruling ZANU-PF party over Mugabe’s succession pitted him, a vice president, against the president’s wife, Grace.

On November 6, the internal power struggle led to the dismissal of Mnangagwa, who fled to South Africa for safety.

But in a sudden move, the military seized power on November 15 and placed 93-year-old Mugabe under house arrest at his Blue Roof Residence in Harare. As pressure grew, Mugabe finally resigned on Tuesday, putting an end to his reign of 37 years.

Mnangagwa’s political shrewdness and ability to survive seemingly dire situations have seen him grow into his nickname.

Tales of his dramatic escape from Zimbabwe shortly after his firing as vice president could make for an action movie script, and have earned him wide popularity and sympathy among many Zimbabweans.

Many believe he represents change and could turn the country’s fortunes around.

Launched two years ago, the initiative is still in its infancy. But some analysts believe it has the potential to return Zimbabwe to its status as the breadbasket of the region.

As a prominent ZANU-PF official, Mnangagwa backed the seizures of white-owned commercial farms at the turn of the millennium.

However, in his home province of the Midlands he reportedly “secretly” protected some white farmers from being driven from their lands.

According to leaked intelligence reports reviewed by Reuters news agency, re-engaging white farmers could be one of the potential priorities in a post-Mugabe era.

“Mnangagwa realises he needs the white farmers on the land when he gets into power … he will use the white farmers to resuscitate the agricultural industry, which he reckons is the backbone of the economy,” reads part of the report.

In his first public remarks since fleeing into exile for safety, Mnangagwa expressed keenness in reshaping Zimbabwe into a more inclusive nation across the lines of race and political affiliation.

His vision for the country, he said, also includes re-engagement with the international community.

As Mugabe’s second-in-command, he has brokered multi-million dollar trade deals with Russia, China and South Africa.

In 2015, he led trade delegations to Europe in an effort to re-open lines of communication with the West which, in 2001, imposed targeted sanctions on top government leaders, including Mnangagwa, during one of Zimbabwe’s darkest decades of political and human rights violations.

Much to the chagrin of Mugabe, Mnangagwa has built up a rapport with foreign investors, the International Monetary Fund and local diplomats, including Britain’s ambassador to Zimbabwe, Catriona Laing.

Despite denials by Laing, the ambassador was criticised by the Movement for Democratic Change (MDC-T) opposition party for backing an “incorrigible regime”.

While many supporters wave banners inscribed “E.D. for a new Zimbabwe”, in the belief the 75-year-old could reform the country’s economy, the reality is that Mnangagwa belongs to ZANU-PF’s old guard.

Since 1980, he has held a number of roles, including minister of state security, minister of justice and ZANU-PF’s chief election agent in 2008 – all helping create the system that enabled Mugabe to remain in power.

The two have been close allies since the 1960s, when Mnangagwa’s family took in the young Mugabe when he was deployed as a rural teacher in their area.

They forged a friendship, with Mugabe taking Mnangagwa under his wing as his protege. Both were sentenced to at least 10 years in prison for their anti-colonial acts. In jail, they studied law via correspondence.

Although tarnished by his role in ethnic massacres in the 1980s and intimidating the opposition, Mnangagwa has promised a new era of democracy under his leadership.

Alex Magaisa, a law professor and former government adviser, told Al Jazeera that Mnangagwa will have to work hard to “cleanse” his reputation.

With the economy in tatters and political stability wavering, Magaisa said improving people’s wellbeing could work well in his favour.

“If the economy is fixed, people will generally be happy,” he said.

On Wednesday, in his first public address since his dismissal, he vowed to bring a different political reality in Zimbabwe, which is scheduled to hold elections next year.

“Never should the nation be held at ransom by one person ever again, whose desire is to die in office whatever the cost of the nation,” he told the cheerings crowd.

After almost 40 years of one-man rule, Mnangagwa faces many challenges as the country’s new president.

Whether he will succeed remains to be seen. 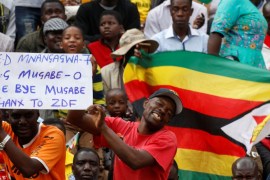 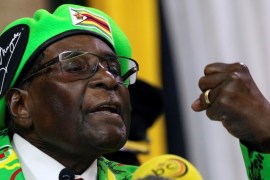