Lucia Vijil pounds out a flurry of tweets directed at Honduras’ leading presidential candidates, pressuring them to make specific proposals on women’s rights. It’s more than clicktivism, she says.

Vijil is one of hundreds of feminist activists with a clear message for politicians ahead of Sunday’s election: Honduran women won’t vote for candidates who ignore them.

A recent graduate, Vijil, 21, is the social media mastermind behind a new Oxfam-funded initiative that aims to put women on politicians’ agendas.

The initiative called PoletikaH – a Spanish portmanteau combining politics and ethics – aims to widen the conversation and expose candidates when they fail to rise to the occasion.

Fed up with seeing their concerns sidelined, PoletikaH and more than 70 women’s organisations came together to launch on September 12 a feminist political agenda to serve as a measuring stick to scrutinise the presidential candidates’ focus on the problems women face ahead of the November 26 election.

The problems are grave.

One woman is murdered every 14 hours in a femicide crisis that has reached epidemic levels in the wake of the 2009 US-backed military coup, which briefly put Roberto Micheletti in power as president before Porfirio Lobo Sosa of the conservative National Party won national elections later that year.

Under strict rules outlawing abortion, women can face up to six years behind bars for seeking to end a pregnancy.

In the most unequal country in Latin America, according to World Bank data, women also disproportionately suffer the brunt of poverty, a global trend recognised by UN Women, the agency that deals with gender equality and women’s empowerment worldwide.

Vijil explains in a phone interview from the Honduran capital, Tegucigalpa, these and other issues – such as rampant domestic violence and gender discrimination in education – have long been ignored.

“PoletikaH represents a complex challenge,” says Vijil, who works with the Center for the Study of Democracy. She highlights the machismo that pervades Honduran politics and society, and the lack of awareness about the gendered dynamics of key issues such as poverty and inequality.

Among other proposals, it calls for introducing comprehensive laws on gender violence, sexual education, and agrarian reform with gender equity. It also advocates repealing laws that limit women’s access to common goods, such as the controversial Mining Law and Seeds Law.

The 2013 Mining Law lifted a moratorium on mining concessions, opening the door to foreign investment, while the 1980 Seed Law, modified in 2012, imposes certification controls on seeds, limiting their free circulation.

Through a gender lens, many of the demands highlight systemic issues of inequality, impunity, and weak public institutions gutted by years of neoliberalism, doubled down since the 2009 coup.

The Center for Economic and Policy Research has reported the post-coup governments have slashed social spending and pursued foreign investment and privatisation of public services as deficit-reducing strategies.

“As long as women can’t get out of these situations [of poverty],” Suazo says, “as long as they don’t have guarantees for a dignified life, improvements in their labour rights, and access to land, technology and credit, the country will not develop no matter how much foreign investment comes.”

Through biweekly reports analysing debates and policy discussions, PoletikaH rates the top three presidential candidates for their feminist credibility while lobbying parties to deepen their proposals.

PoletikaH presents the evaluations in an online tracker using red, grey, yellow, and green symbols that allow voters to assess the candidates’ standing with respect to the women’s agenda.

Vijil describes PoletikaH as a “confrontational” tool. Together with volunteers, she pressures candidates in real time on social media during broadcast debates or other events. Even when candidates fail to address the topics, her team creates visibility around the issues.

The initiative isn’t limited to online spaces. Suazo leads PoletikaH’s lobbying efforts, including negotiating with candidates from a feminist perspective to urge them towards more robust proposals.

Suazo – who works with one of Honduras’ principal feminist organisations, the Center for Women’s Studies – explains the results, though varied between parties, are undeniable.

“We’re conscious of the fact that the topic of women has never been talked about so much,” she says.
PoletikaH’s evaluations of the candidates have notably improved in the weeks leading up to the election.

Suazo says the opposition alliance agreed to include an entire chapter in its platform on women’s rights, while the Liberal Party and governing National Party are expected to incorporate at least a paragraph of PoletikaH’s recommended wording on women’s rights.

Both Hernandez and Zelaya have failed entirely to address indigenous rights, the women’s agenda item that Suazo says has been most excluded.

While there’s still work to do, Vijil argues that just getting candidates to sit down at the table with feminist activists is a step in the right direction.

Despite being innovative, PoletikaH has not evaded controversy. Vijil explains the feminist old guard, which has fought important human rights battles in the streets, has been resistant to see social media as a legitimate tool for social change.

But she points out digital activism has a proven track record of boosting political engagement in Honduras, highlighting as an example weeks of anti-corruption protests in 2015, convened on social media, that demanded an end to government fraud and institutional responses to the corruption crisis.

“We have to see PoletikaH not as competition against struggles in the street,” Vijil says. “But rather it represents another tool to support the construction of a feminist and political movement.”

The social media focus has also been effective in attracting youth, with young people making up a large portion of the initiative’s volunteers, according to Suazo.

Other critics refused to back PoletikaH over disagreements in strategy.

The Center for Women’s Rights (CDM), another prominent feminist organisation, maintains that PoletikaH legitimises an “illegal” election and diverts energy away from grassroots “rebellion”.

President Hernandez is the first sitting or former president to seek a second term in office after a contentious 2015 Supreme Court ruling changed the constitution to allow re-election. Critics say only the Honduran people have the power to modify the constitution, rendering Hernandez’ candidacy illegitimate.

CDM’s Neesa Medina argues grassroots feminist movements should transcend electoral politics. “Our bet continues to be on strengthening and accompanying social movements in their struggles from within and doing so with feminist values,” she says.

But Vijil believes with Sunday’s vote guaranteed to go forward, it’s better to wage a confrontational campaign to challenge the candidates than to allow the election to pass by undisturbed by feminist analysis.

“We have to at least try to put women on the agenda,” Vijil says.

Suazo agrees. She adds that women’s agenda is something historic. Not only was it developed collectively by feminist groups, but it also sets an example of critical analysis and engagement in the campaign – elements that have been lacking in Honduran electoral process.

Final polls released before the one-month pre-election ban on new polling data gave Hernandez a 15-point lead over Nasralla, his closest competitor, The opposition alliance has warned of a fraud plot to steal the election in Hernandez’ favour.

Regardless of the outcome, activists plan to continue using PoletikaH to monitor the new president and hold him accountable for his campaign promises.

Vijil points out voters who felt represented by PoletikaH will be well equipped to make demands of their candidate with further monitoring. She laments that elections often get reduced to marketing campaigns but is optimistic that a tool like PolétikaH will help impose checks and balances.

Suazo hopes that PoletikaH’s work during the campaign opens doors with candidates so that women’s movements will be in a stronger position to negotiate demands.

“We are aware that as women’s and feminist movements we will always have to fight for some of our rights to be fulfilled,” she says. “But we really need candidates and politicians in Honduras to start to understand the importance of women’s rights and ensure they are respected.” 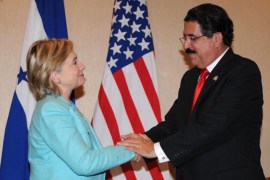