Two Islamic organisations and 11 individuals have been added to an existing “terror list” drawn up by four Arab countries that are blockading Qatar, claiming the entities and individuals are supported by Doha.

State-run Saudi Press Agency issued a joint statement by Saudi Arabia, Bahrain, Egypt and the United Arab Emirates (UAE) on Thursday, saying the quartet’s move was taken “in light of their commitment to fighting terrorism, drying up their sources of funding, combating extremist ideology…and its promotion”.

Saudi Arabia and its allies, which have imposed a land, sea, and air blockade on Qatar since June, accuse Doha of supporting “terrorism”. Qatar has denied this.

The two organisations that were added to the blacklist were the International Union of Muslim Scholars, headed by Yusuf al-Qaradawi, a prominent theologian from Egypt, and the International Islamic Council for Da’wah and Relief.

“The two listed entities are terrorist organisations working to promote terrorism through the exploitation of Islamic discourse and its use as a cover to facilitate various terrorist activities,” the statement read.

“The Individuals also have carried out various terrorist operations in which they have received direct Qatari support at various levels, including providing them with passports and assigning them to Qatari institutions with a charitable appearance to facilitate their movement,” it further read.

The 11 individuals include the director of relief and international development at the Qatar Red Crescent, Khaled Nazem Diab, Bahraini dissident Hassan Ali Mohammed Juma Sultan, and the acting general leader of the Muslim Brotherhood, Mahmoud Ezzat.

A Qatari national, Mohammed Suleiman al-Haydar, is among the new entries, while some of the other additions are from Egypt, Libya and Somalia.

The blockading countries said Qatari authorities have not “taken effective action to stop terrorist activity”, and reaffirmed their commitment to establishing “security in the region”.

Al-Qaradawi was initially on the list when it was first released in June. In addition, 18 Qatari nationals including businessmen, politicians and senior members of the ruling family, were on the list.

In a round of additions, six Libya-based entities and three Yemen-based organisations were included. The four Arab governments accused them of having ties to al-Qaeda.

SPA previously reported that three Qataris, three Yemenis, two Libyans and a Kuwaiti were also banned on the basis of being implicated in “fundraising campaign to support [former al-Qaeda affiliated] al-Nusra Front and other terrorist militias in Syria”.

In a separate development on late on Wednesday, Qatari Prime Minister Abdullah bin Nasser Al Thani said in a television appearance that the ongoing Gulf crisis’ objective was to “intervene” in Qatar’s internal affairs.

“This is unacceptable and is a red line for us and the people of Qatar,” he said while stressing the importance of dialogue at this time.

“Qatar has supported … mediation efforts and continues to do so,” he said.

“Qatar is open to dialogue provided that the sovereignty of states and the principle of non-interference in internal affairs are maintained.”

Demands made by the quartet have included suspension of support for groups such as the Muslim Brotherhood, cooling of ties with Iran, shutting down the Al Jazeera media network and several other media outlets, and the removal of Turkish troops from Qatar.

Qatar has strongly denied the accusations and rejected the demands. 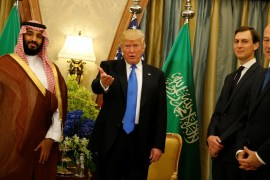 Why Saudi-Israeli normalisation could be dangerous

Apart from being disastrous for Palestine, normalising relations with Israel could get Saudi Arabia in real trouble.