British Colombia has been lashed by an active winter storm. Heavy downpours, strong winds and snow have battered the region over the past few days.

More than 70 millimetres of rain fell in Vancouver between Saturday evening and Monday morning, and elsewhere the rain was even heavier. Port Alberni reported 115mm in just 24 hours.

As the rain fell, the winds roared, with gusts of up to 90 kilometres per hour reported along some coasts, forcing the cancellation of some ferries.

“We picked up 10 millimetres in just one hour, and we only see that about every two years in Vancouver,” Environment Canada meteorologist Matt MacDonald told CTV News.

He explained that it was inevitable that this sudden downpour had triggered flooding.

“What happens when it rains that hard is that it surpasses infrastructure’s capacity to flush that out, so storm drains end up getting clogged, especially those that have leaves at the entrance. So, we did see a lot of water pooling and localised flooding.”

Although the rain was heavy, the water is needed, because so far November has been rather dry. The airport would usually expect around 186mm of rain in the month, but so far only 92mm has fallen.

More persistent rain is forecast from Tuesday to Thursday, and there could well be more on its way.

La Nina conditions have recently developed in the Pacific Ocean, and this normally brings a wetter and colder winter than usual to western Canada.

However, La Nina is not the only thing that can affect a forecast, and Environment Canada is the first to admit that long-range forecasts should always be taken with a pinch of salt:

Something to keep in mind when looking at #SeasonalForecasts: We (and everyone else) have absolutely NO skill in forecasting precipitation beyond 2 weeks #MythBusting pic.twitter.com/1W57tEAhCx 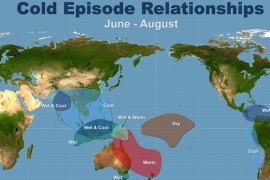 The Little Girl returns to change the world