A new ground-breaking report by Amnesty International has described the situation of the Rohingya living in Rakhine State as one of “apartheid”.

The report, titled “Caged without a roof: Apartheid in Myanmar’s Rakhine State“, capped two years of extensive and investigative research into the legal status and conditions of the Rohingya minority.

“They live under a system of repression that is upheld through the intricate web of laws, policies and practices, imposed by state officials at all levels – township, district, state and nation-wide,” said Laura Heigh, Amnesty International’s Myanmar researcher.

Olof Blomqvist, a spokesperson for Amnesty International, told Al Jazeera that the report puts into context what has been happening to the Rohingya in the last few months.

“We’ve documented horrific violations and stories by the Myanmar military over the last couple of months,” he said, “but what is not widely known is that this did not happen in a vacuum.”

The discriminatory policies, the report says, are institutionalised by a “regime of systematic oppression and domination of a racial group” which goes back to 1982, when authorities denied the Rohingya citizenship and the rights associated with it.

Myanmar government has excluded Rohingya from the list of 135 recognised ethnic groups.

One of the main apartheid practices is the severe restrictions on freedom of movement.

Across the Rakhine State, the Rohingya are under lockdown in their homes every night, and face the risk of arrest and require special travel permits to move from one township to another.

The report also details the systematic social and political exclusion of the Muslim communities. In the north of the state, gatherings of more than four people in one place are prohibited, which hinders the Rohingya’s right to worship and to politically advocate for their rights.

Healthcare access is also curtailed, and the main hospital in the capital Sittwe has segregated wards for the Rohingya.

“We don’t have access to healthcare, to education, there are restrictions on travelling,” said one Rohingya interviewed by the human rights group. “We can’t go anywhere on the road because there are checkpoints along the way. We are struggling for survival, our children are struggling for their future”

The report urged the Myanmar authorities to “urgently adopt a comprehensive action plan on combating discrimination and segregation”. It also called for government initiatives to dismantle the system of apartheid and to ensure the respect of human rights.

“We hope by documenting this the international community and Myanmar will wake up and realise this it is not about short-term solutions to the violence in the past couple of months but about addressing long-term state-sponsored apartheid,” Blomqvist said.

Since August, Myanmar’s military has driven out about 600,000 Rohingya from Rakhine State into neighbouring Bangladesh. The military says it launched a crackdown on Rohingya after an army base came under attack.

Myanmar’s de facto leader, Aung San Suu Kyi, has been criticised for her silence on the atrocities against Rohingya.

Rohingya activists have accused her of “denying their existence” as she has failed to criticise military’s campaign that the UN rights chief has called “text-book case of ethnic cleansing”.

“Aung San Suu Kyi today demonstrated that she and her government are still burying their heads in the sand over the horrors unfolding in Rakhine State,” the Amnesty said.

About one million Rohingya have fled Myanmar since the first brutal military action in 1977. 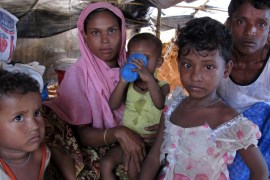 Human Rights Watch has released a report accusing Myanmar’s army of further abuses against civilians. It says there has been systemic rape and sexual violence against Rohingya women and girls in Rakhine state. 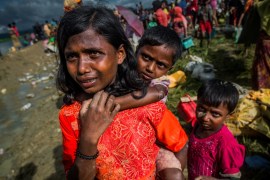 Who can protect the Rohingya Muslims?

The US’ top diplomat decries Rohingya suffering but stops short of calling it ethnic cleansing or demanding sanctions.