At least eight people have been killed and 12 injured in New York City after a driver rammed into cyclists and pedestrians before being shot by police on Tuesday.

What happened in the New York City attack?

Who is Sayfullo Saipov?

How did Trump respond?

In NYC, looks like another attack by a very sick and deranged person. Law enforcement is following this closely. NOT IN THE U.S.A.!

We must not allow ISIS to return, or enter, our country after defeating them in the Middle East and elsewhere. Enough!

My thoughts, condolences and prayers to the victims and families of the New York City terrorist attack. God and your country are with you!

Trump also said he ordered Homeland Security to “step up” the US’ “already Extreme Vetting Program”.

I have just ordered Homeland Security to step up our already Extreme Vetting Program. Being politically correct is fine, but not for this!

We are fighting hard for Merit Based immigration, no more Democrat Lottery Systems. We must get MUCH tougher (and smarter). @foxandfriends

This was a cowardly act of terror. It was intended to break our spirit. But New Yorkers are resilient. We will be undeterred.

My heart breaks for #NYC today. Thoughts & prayers as we monitor the situation.

NYC terrorist was happy as he asked to hang ISIS flag in his hospital room. He killed 8 people, badly injured 12. SHOULD GET DEATH PENALTY! 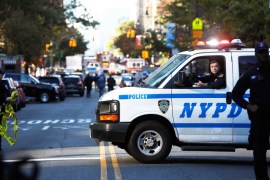