Harare, Zimbabwe – Thousands of Zimbabweans have taken to the streets to demand President Robert Mugabe‘s resignation, a spectacle that would have been unthinkable just one week ago.

Saturday’s rally in Harare, the capital, is backed by the army, which seized power on Wednesday.

The mood at Zimbabwe Grounds, where speeches took place, was celebratory.

The site is symbolic. In 1980, around 200,000 people gathered at Zimbabwe Grounds to welcome Mugabe from exile after the liberation war from white-minority rule.

Crowds there on Saturday cheered: “Chiwenga, lead the war to remove Mugabe”, referring to General Constantino Chiwenga, who had warned of military intervention before the takeover.

Protesters are attempting to reach State House, but presidential guards have blocked access.

Al Jazeera witnessed a general telling crowds to go home and not to proceed “because we will finish the job”.

“The operation we are doing together as a country is a journey,” Major General Sibusiso Moyo told those attending the rally.

“We cannot go around the mountain in one day, but through your support we have covered a great distance,” he added in Shona.

Marchers seemed confident their goal to remove Mugabe would be achieved soon.

“Just the amount of people, the different backgrounds and races that came out, showed that we all agreed today,” Anesu Dawa, a 26-year-old unemployed graduate, told Al Jazeera.

“Everybody came out just to say it’s not necessarily what we want to happen, but it’s what we don’t want to happen – and that is for President Mugabe to still be president,” she said.

“And we all agreed today that he must go.”

A demonstration is also taking place at City Hall in Bulawayo, the second city.

Florence Mguni, a 59-year-old who went to train in Mozambique as a liberation fighter at the age of 15, travelled overnight from Bulawayo in the hope of witnessing Mugabe’s departure.

She told Al Jazeera that as a war veteran, she demands Mugabe’s immediate resignation because his leadership has done little for her.

“We went to fight in the war, I was taught how to hold a gun as a young girl, but today Zimbabwe is free and I am poor. I’m a widow and my children aren’t in school because I can’t always afford to pay their fees,” she said.

Roads and mobile networks were jammed because of the large crowds as demonstrators raised banners with slogans such as: “Go, go, our general!”, “Enough is enough – Mugabe must go” and “Leadership is not sexually transmitted” – a reference to First Lady Grace Mugabe, who is widely believed to be eyeing the vice presidency.

Some protesters hugged and cheered soldiers, as helicopters circled above the capital.

Tapiwa Magidi, a 32-year-old geologist, said Mugabe should resign because the 93-year-old leader was not serving young people.

“We are a lost generation. Most of the young people in this country were born after independence, but we are now grown and we don’t have much,” he told Al Jazeera. “We can’t get jobs, we have to live at home with our parents and we can’t even afford to get married.”

Tapiwa Tavaziva, a 32-year-old financial adviser who had left Zimbabwe for the US, said: “I spent 12 years out of this country because of Mugabe and the situation in this country. He’s been responsible for so many things that have happened to people in their personal lives, he broken up so many homes, family structures are broken and we don’t have what we used to because he (Mugabe) loves power.

‘A show of people’s force’

Zimbabwe has been in turmoil since early Wednesday, when the armed forces seized power and placed Mugabe – who leads the Zanu-PF party, under house arrest.

March organiser Chris Mutsvangwa, head of the Zimbabwe National Liberation War Veterans Association, said the protest against the president is not a Zanu-PF affair, but “a show of people’s force” against Mugabe’s 37-year rule.

William Gerald Lumumba Mutumanje – popularly known as Acie Lumumba, an activist who was expelled as the Zanu-PF youth leader, said the rally was a “send-off” for Mugabe as he encouraged people to march.

Activist pastor Evan Mawarire described the event as “a momentous occasion” and an opportunity for a “fresh start” to advance democratic change.

Mawarire has previously faced charges of undermining the president and trying to overthrow an elected government by calling on Zimbabweans to protest against spiralling economic and political problems.

Marches have also been called for in parts of South Africa, the UK and the US – countries that millions of Zimbabweans migrated to in search of safety and better living, as various economic and political crises at home have left more than 70 percent living below the national poverty line.

All 10 of ZANU-PF’s provincial structures have passed a motion of no-confidence against Mugabe and called on him to step down as the ruling party’s first secretary.

Zanu PF’s 10 Provincial Coordinating Committees (PCC) said the leader had “lost control of the party and government business due to incapacitation stemming from his advanced age”.

The provincial branches’ move was carried by Zimbabwe’s state broadcaster, ZBC, which was seized by the army as part of its takeover on Wednesday.

If Mugabe fails to resign on Saturday, the party says it will convene a special committee meeting on Sunday in which the Zanu-PF Central Committee will consider the provincial resolutions to recall Mugabe.

The Zimbabwean president appeared in public on Friday – the first time since the army’s takeover on Wednesday – attending a university graduation ceremony in Harare.

Zimbabwe’s military has said it was engaging in talks with Mugabe, promising an outcome soon.

As a legislator, he said he would start the process to put forward a motion to pass a vote of no confidence.

“If he refuses to leave we will start a motion to pass a vote of no confidence in his presidency when parliament sits again on Tuesday.”

Regional dignitaries from the Southern African Development Community (SADC) are expected to meet on Sunday in an extraordinary session to discuss the Zimbabwe situation in neighbouring Botswana, where the SADC headquarters is located.

While the region’s leaders have been silent on Mugabe’s fate, Botswana’s President Ian Khama has openly called for the elderly veteran to step down. 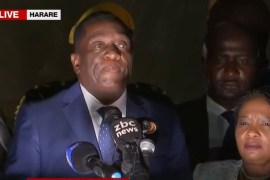