Egyptian authorities have temporarily opened the Rafah border crossing with the besieged Gaza Strip for the first time since the signing of a power-sharing deal between Palestinian political parties in Cairo last month.

Rafah, the main crossing in Gaza’s south, is expected to remain open for three days, starting on Saturday.

Hosam Salem, a Palestinian journalist at the crossing, said about 10 buses had left the Strip by 15:00 GMT, while one bus had entered.

He estimated that about 500 Palestinians had been allowed to leave.

The reasons for travel include medical and humanitarian ones, education purposes and the return of Palestinians stuck outside.

Rafah is the main exit for the two million Palestinians in the Strip to the outside world since Israel imposed an airtight land, sea and air blockade on the area more than a decade ago.

The last time that Rafah was opened was on August 16 – about three months ago. Over the past year, the crossing has been open for just 14 days in total, according to Salem.

“If the border crossing remains open for two weeks, then maybe there will be less congestion and things will be under control. But if it is open for three days only, then things aren’t going to improve much,” he said, estimating that more than 20,000 people had applied to leave the Strip two months ago.

The Palestinian parties’ reconcilliation agreement on October 13 saw the transfer of authority over the border crossing from Hamas, the movement that runs the Gaza Strip, to the West Bank-based Palestinian Authority (PA).

Hamas’ Ministry of Interior and National Security said in a statement on Saturday that “the relevant teams from the ministry have been present from the hours of the early morning to prepare the buses for travellers”.

From then on, the PA’s General Authority for Crossings and Borders was responsible for facilitating the travel to the Egyptian side, according to the statement.

Iyad al Buzom, Gaza’s interior ministry spokesperson, said Saturday’s development is “the start of a new phase of the Rafah crossing” and is hope for keeping the crossing permanently open in the long run, “to end the suffering of people in Gaza”.

After a decade of divide, last month’s agreement between PA and Hamas gave hope to Palestinians in the besieged Strip that conditions would improve.

Impacted by a suffocating blockade, three Israeli assaults, and punitive measures from the PA aimed at forcing Hamas to cede control, the Strip has been experiencing a downward spiral that has only worsened an already dire humanitarian and economic situation.

The small enclave is one of the most densely-populated areas in the world. It has been aptly described as “the world’s largest open-air prison”.

About 42 percent of Palestinians in Gaza suffer from poverty, youth unemployment stands at 58 percent and some 80 percent rely on international aid, mainly for food, according to the World Bank.

Nadia Abu Shaaban, a 24-year-old student living in Gaza city, said she is not hopeful that the opening of the crossing would change the situation on the ground.

“I want to leave and continue my studies outside, but we’ve been through this so many times – where things just remain as bad as they are. It’s hopeless,” she told Al Jazeera.

“Everyone in Gaza wants to leave, but we’re going to wait and see if things actually improve. So far, it seems that the crossing is really congested, and people are jumping over each other to get through. It’s a mess.”

Despite promises from Palestinian leaders that the unity deal will ease the difficult conditions in Gaza, the substantial effects of reconcilliation remain to be seen. 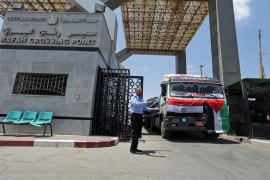 As agreed in the reconciliation talks, Hamas transfers administrative control on Gaza’s border crossings to the PA. 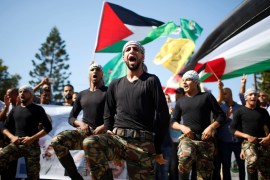 Three issues that could derail the Fatah-Hamas deal

What will happen to Hamas’ arms stockpiles, administration and employees still remains unclear.