Harare, Zimbabwe – The leader of Zimbabwe’s largest opposition alliance has called on the world’s oldest sitting president, Robert Mugabe, to voluntarily step aside as the country entered its second day of a military takeover.

“In the interest of the people, Mr Robert Mugabe must resign and step down immediately in line with the national expectation and sentiment,” Morgan Tsvangirai said at a press conference on Thursday.

Former Vice President Joice Mujuru – who was dismissed in 2014 on allegations of plotting against Mugabe – declined to comment on the president’s confinement. But she has said the situation highlighted the need to create a transitional administration to oversee free and fair elections in the southern African nation.

Former Minister of Finance Tendai Biti echoed Tsvangirai’s sentiments on Mugabe’s resignation and told Al Jazeera the time had come to draw a line in the sand for Mugabe’s 37-year rule.

“Mugabe cannot resist any more because it will result in those who want him gone using extra-legal means to remove him from power. That will be a very unfortunate end, but you don’t have to be a rocket scientist to see that it’s inevitable,” Biti said in a phone interview.

Tsvangirai, who describes himself as “a democrat”, has said he does not support power-grabbing through unconstitutional means. He urged the swift return to constitutional order through the creation of an all-inclusive national transition body, saying this was the only way out of the current standoff.

“A coup has happened, and we cannot have the army as the de facto leader, so there needs to be an urgent restoration of a legitimate authority in Zimbabwe,” said Tsvangirai.

“Under this situation, we no longer have a Mugabe administration, so we need a national transitional authority that can build a bridge between the old order of Mugabe and the new authorities that must be elected through a credible vote.”

Tsvangirai’s Movement for Democratic Change (MDC) party has been the biggest challenger of Mugabe’s Zanu-PF party. After the 2008 violent presidential runoff, a government of national unity was formed to resolve the crisis.

Although Tsvangirai served as prime minister to Mugabe, he maintained there has always been distrust between the two rivals. However, he also said despite years of experiencing political violence and imprisonment at the hands of Mugabe’s regime, he did not find comfort in Mugabe’s current predicament.

“I don’t take pleasure in what Mr Mugabe is experiencing. To me it was never a personal issue, it was political, and if I were to meet him today there would not be any animosity,” he told reporters.

Tsvangirai ruled out forming another coalition government if it was presented as an option to end the military standoff with Mugabe.

While Mugabe and his wife Grace – who many analysts say was set to replace her husband as Zimbabwe’s president – remain confined to the Blue Roof residence, regional mediation efforts to end the crisis are under way.

The two ministers are currently in talks with Mugabe and the generals at the State House where they hope to reinforce Zuma’s call for “calm and restraint” as well as caution against a full military takeover.

Zanu PF spokesman and Minister of Information Simon K Moyo told Al Jazeera he was looking forward to the outcome of the discussions with the envoys.

“We can only hope for the best,” he said in a brief phone conversation.

Although many Zimbabweans are hopeful for change from Mugabe’s 37-year authoritarian rule, most people on the streets of the capital Harare shied away when asked to comment on his house arrest.

Cletus Mubaiwa, 29, an electrical engineer, told Al Jazeera he hoped Mugabe’s situation with the army would be resolved peacefully.

“As a Zimbabwean what I wish for is peace, stability, and economic change. I don’t want the political situation to get out of hand and for there to be serious violence that could lead to harassment of people and violations of human rights like we have seen before,” said Mubaiwa.

The army maintains its presence in the city centre guarding strategic sites such as parliament, the courts, the Zanu PF headquarters, and state broadcaster ZBC TV. At least two tanks with 14 armed soldiers could be seen parked around the courts and parliament.

According to witnesses, there was a brief altercation on Wednesday between three army troops and at least 20 police officers who normally guard parliament. The confrontation resulted in the detention of the police.

No police were visible outside parliament on Thursday, nor could they be seen around the city centre where they often set up checkpoints.

Government offices closed on Wednesday re-opened on Thursday in Harare and Bulawayo, the second-largest city. Shops and schools were open, but the army warned the public to restrict movements until the military operation was over.

The army insists its action was not a coup, however, regional and international communities have raised concerns at its unprecedented move.

Several of Mugabe’s top ministers, including Minister of Finance Ignatius Chombo, are currently being detained by the army at the King George VI military barracks.

When contacted for comment, military spokesman Overson Mugwisi told Al Jazeera the detentions were a security matter and he was unable to comment further. 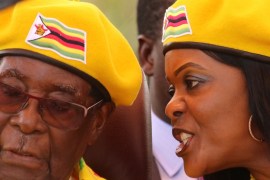 Mugabe: Between the wife and the loyal lieutenant

Robert Mugabe made the wrong choice that cost him the presidency. But this could turn for the better for Zimbabwe. 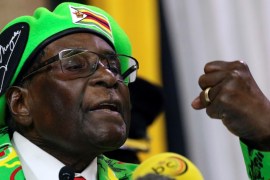 South African leader says he spoke to Zimbabwean counterpart, who ‘indicated’ he was fine but not allowed to leave home.