Saud Kabli, the director of the Information Office at the Saudi Embassy in Washington, denied the claims through his personal Twitter account on Friday, calling NYT journalist Ben Hubbard’s reporting “flawed.”

He also pointed out that it was regrettable Hubbard did not inform the embassy of plans to publish a story on the allegations of detainee abuse, as well as offer them an opportunity to respond to the accusations.

Habib el-Adly – who reportedly fled Egypt after his corruption conviction last April – is in Saudi Arabia, the New York Times quoted an Adly adviser and a former Egyptian interior minister as saying.

Adly, 79, has been consulting Crown Prince Mohammed bin Salman during his alleged corruption crackdown, the report said, which includes the detention of 11 cabinet ministers and scores of the country’s leading businessmen.

The New York Times quoted an American official and a Saudi doctor as saying 17 detained officials have required medical attention because of physical abuse suffered at the hands of those guarding them. Some of the Saudis are reportedly being held at the Ritz-Carlton in the capital, Riyadh.

Adly was Egypt’s interior minister under former president Hosni Mubarak from 1997 until the regime’s fall during the Arab Spring in 2011.

During his time as the country’s top security official, Adly developed a notorious reputation for torture, forced disappearances, and other human rights abuses.

After being convicted for corruption last April and sentenced to seven years in prison, he disappeared and Egypt’s interior ministry declared him a fugitive. Adly was found guilty of embezzling more than $110m of public funds.

A Saudi spokeswoman at the embassy in Washington DC told the New York Times she couldn’t confirm or deny allegations of Adly’s presence in the kingdom.

Farid al-Deeb, Adly’s lawyer, denied that his client was in Saudi Arabia. He said Adly was still in Egypt and would appeal his seven-year sentence on January 11, 2018 at the Court of Cassation, reported the Egypt Independent news website on Thursday.

Adly also faced a string of criminal cases against him since the 2011 uprising that ousted Mubarak but had been cleared.

He had been accused of ordering security forces to open fire on protesters demanding the regime’s overthrow. 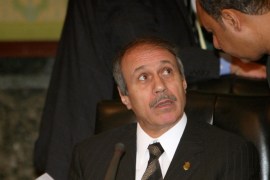