The first of the season’s winter storms has just built over northern Afghanistan. It brought thunderstorms to Kabul and significant snow to the mountains in Salang, to the north.

The spillover stirred the air in Pakistan and brought some rain to Lahore and Islamabad. The visibility increased to a hazy four kilometres in both cities after having been at 1,000 metres or less through fog and pollution.

In India, Haryana state and New Delhi both benefitted from the change in weather.

Smog has enveloped much of Pakistan, as it does every winter, causing highway accidents and respiratory problems, and forcing many residents to stay home. Authorities have advised people to limit road travel.

A highway police official said more than 10 people were killed and 25 injured in road accidents linked to poor visibility in various parts of the Punjab province in the past two weeks.

Pakistani meteorologist Mohammad Riaz said the pollution, caused by dust, the burning of crops, and emissions from factories and brick kilns in Pakistan and neighbouring India, was expected to linger until the middle of the month. He advised people to wear face masks to protect themselves from respiratory ailments.

Average air pollution in Pakistan’s major cities is about four times higher than the World Health Organization limits. Although reports said that air quality this year was better than that of last year, pollution levels in the capital recently hit 18 times the healthy limit.

The main irritant in this particular smog is smoke particles of 10 microns or, more abundantly, 2.5 microns. These are both irritating and probable carcinogens but can be washed out by rain.

Inevitably, as the weather settles again, an increase in pollutants will thicken the smog to “very unhealthy” or “hazardous” levels once more with human activities the sole contributor. 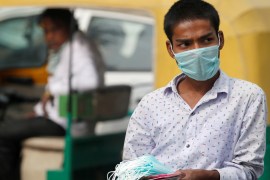 Hospitals fill up in Delhi as ‘killer’ smog continues

People in Indian capital battling the highest pollution in years with sharp rise in patients with lung problems. 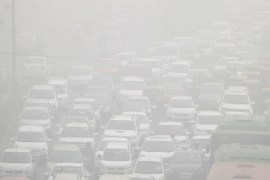 Smog in and around the cities of Lahore and New Delhi has reached new stretch over the past few days. 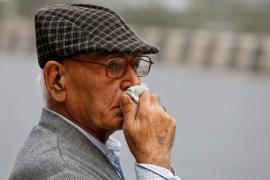 Enveloped by a choking shroud of toxic smog, New Delhi has declared a public health emergency as Lahore is also covered.