Zimbabwe‘s army seized control of the country on Tuesday night, claiming it was removing “criminals” around Robert Mugabe.

An army spokesman said on Wednesday that the army is holding Mugabe for his own safety.

There is no official word from the Mugabe family as to their whereabouts.

Among this unexpected series of events, the following are the latest reactions:

#Zimbabwe's President Robert Mugabe is "being eaten by a monster that he created," says Zimbabwean lawyer @Wamagaisa pic.twitter.com/mZa3AlF2C6

On live TV, an army spokesman denied a coup against Robert Mugabe, instead saying the army seeks to "pacify a degenerating, social, and economic situation." https://t.co/mj2rAqWota pic.twitter.com/NIGADNeZz4

A special edition of The Herald will be in the streets shortly
https://t.co/JTvTh5bfuh

LIVE: Foreign Secretary @BorisJohnson updates the House with latest on situation in #Zimbabwe.

The President urged all political and military stakeholders in Zimbabwe to avoid any action that may plunge the country into unnecessary conflict and impact negatively on the region.

President Jacob Zuma, in his capacity as Chair of SADC, is sending Special Envoys to #Zimbabwe and Angola in light of the unfolding situation in the Republic of Zimbabwe

My thoughts are with the people of #Zimbabwe today. Hoping for a transitional period of stability that leads to a free and fair election.

Due to ongoing uncertainty in Zimbabwe, the U.S. Embassy in Harare will be minimally staffed and closed to the public on November 15.  Embassy personnel will continue to monitor the situation closely. @StateDept

Due to current situation in Zim NL embassy in Harare will be minimally staffed & closed to the public on November 15.

There is increased military activity in Harare and the situation is tense. If you are in Harare, remain indoors and monitor the media. The Embassy will be closed November 15th.

Situation in Harare is calm. Embassy staff, Indian Community, both PIO & Expat are safe. No reason for concern and worry.

BREAKING: Zanu-PF Youth Leader Kudzai Chipanga has been arrested and Parliament staff and police manning the legislative building in Harare have been detained. #Zimbabwe #Harare pic.twitter.com/n1tO2XAHbn

I am receiving unconfirmed reports of arrests of cabinet ministers and prominent people in Zimbabwe. I will share when names are confirmed. Remember the army said they are “targeting thieves around” President Mugabe #Zimbabwe

Folks our nation is in a dangerous place. If there ever was a time to pray for Zimbabwe it would be RIGHT NOW! I’m humbly calling on all who can pray to get on their knees & plead 4 peace & wisdom, we have lost too much as it is 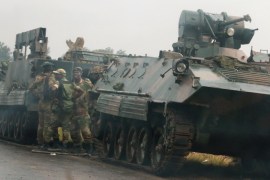 Military spokesperson says army seeks to ‘pacify a degenerating, social, and economic situation’ in the country.