By Shereena Qazi and Alireza Abbaszadeh

Rescue workers in western Iran struggled to find survivors in a frantic search for those trapped under the rubble after a powerful earthquake struck the Iraq-Iran border region.

More than 400 people have been killed in Iran and Iraq and 7,000 injured when the earthquake of magnitude 7.3 hit both countries late on Sunday causing the most damage in Kermanshah province, a rural mountainous region in Iran.

The Red Crescent Society of the Islamic Republic of Iran deployed staff and volunteers to assist in rescue-and-relief operations, but they said “chances of survival are slim” for those buried in the ruins.

“It is total chaos here, most homes are destroyed in Kermanshah and people are stuck under bricks and debris after the earthquake,” Ali Sadeghi, a volunteer from the Red Crescent Society, told Al Jazeera.

“Along with us, families of those trapped are also pulling out people hoping to find them alive. The rescue operation is slow and difficult … We’ve been pulling out bodies since last night.”

US Geological Survey said there were at least 150 aftershocks following the initial earthquake. The worst damage appeared to be in the Iranian town of Sarpol-e Zahab in Kermanshah, nestled in the Zagros Mountains that divide Iran and Iraq.

Residents of Sarpol-e-Zahab told Al Jazeera the power and water supplies were severed in the town and telephone and mobile phone services were irregular.

Fatemeh, a local resident, and other homeless survivors waited in the cold weather for aid after their houses collapsed.

“We lost our home, all our furniture, I don’t know what we will do now. Where are we going to live? I got married two years ago … everything is gone,” Fatemeh told Al Jazeera.

“We’ve just received some food, but we are in dire need of aid right now to cope.”

Fatemeh said people were screaming and wailing in the streets following the major temblor.

“Last night, I was studying when I realised my apartment was shaking. At first I thought it was a minor quake, but when the electricity cut out and our house started shaking, I screamed.

“I don’t remember how me and my husband made our way from the third floor of our building. As soon as we stepped out, our building collapsed.”

Iranian media reported at least 14 provinces in Iran had been affected. The Red Crescent said it set up more than 5,000 tents to provide emergency shelter.

As many as 16,000 people were in need of immediate assistance, the aid group said.

Similar scenes unfolded in Erbil, the capital of the Kurdish region in northern Iraq, and other cities in the country where at least seven people were killed.

Local media in Iran said the Turkish Red Crescent was gathering 3,000 tents and heaters as well as 10,000 beds and blankets, and moving them towards the Iraqi border.

“Everyone is in shock. This earthquake was a sudden wave of death,” Ali Sadeghi said. 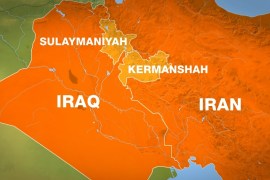 Iran-Iraq earthquake: What happened and why

A magnitude 7.3 earthquake has struck the border region between Iraq and Iran killing hundreds. 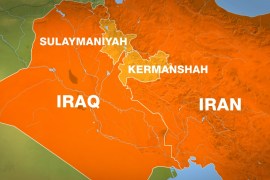