Two air attacks targeted the ministry late on Friday and plumes of smoke could be seen billowing from the building, the rebel media network Al Masirah quoted witnesses as saying.

One of the missiles hit a residential area near the ministry, wounding at least eight civilians, it said. The casualty toll could rise as rescuers search through the rubble for survivors.

The coalition has intensified air attacks in Yemen since the Houthis fired a ballistic missile at the Saudi capital, Riyadh, a week ago.

Saudi Arabia has blamed Iran for supplying the rebels with the missile, sparking tensions between the Middle East rivals and fears of a military confrontation.

The war in Yemen, the region’s poorest country, started in 2014 after Houthi rebels seized control of Sanaa and began pushing south towards the country’s third-biggest city Aden.

Concerned by the rise of the rebels, who are allegedly backed by Iran, Saudi Arabia and a coalition of Sunni Arab states launched a massive air campaign in 2015 aimed at reinstalling President Abd-Rabbu Mansour Hadi’s government.

Since then, more than 10,000 people have been killed and at least 40,000 wounded, mostly from Saudi-led air attacks.

The war has also led to a deadly cholera outbreak with 900,000 suspected cases reported since April, and fears of mass starvation just weeks away because of a Saudi blockade on the impoverished country. 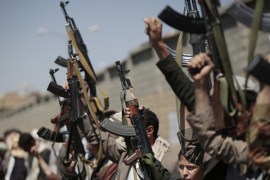