Reports that the Islamic State of Iraq and the Levant (ISIL, also known as ISIS) has recaptured major parts of al-Bukamal, its last stronghold in Syria, have emerged two days after the Syrian army declared it had taken full control over the town.

Rami Abdulrahman, head of the UK-based Syrian Observatory for Human Rights monitoring group, told Al Jazeera on Saturday that ISIL has captured some 60 percent of al-Bukamal, an eastern town in Deir Az Zor province on the border with Iraq.

Abdulrahman also said the centre of al-Bukamal has continued to witness fierce fighting between ISIL and the Syrian army and its allies Hezbollah, the Iraqi Popular Mobilisation Forces (PMF), and the Iranian Revolutionary Guard.

ISIL’s retaliatory attacks come after the Syrian army’s announcement on Thursday that it had regained full control of the town.

Following the statement, Syria’s political and armed opposition denounced the entry of the Iraqi PMU in al-Bukamal as a violation of its sovereignty.

“The [Bashar al-] Assad regime is primarily responsible for the current situation in Syria and for exposing the country to various forms of foreign hegemony, occupation, and violation of sovereignty.”

A video circulating online, said to be released by ISIL’s news agency Amaq on Friday, purportedly shows ISIL fighters battling Assad forces in what the narrator says are the outskirts of al-Bukamal.

The video, which bears the Amaq agency logo, is titled “Syrian regime forces fail to enter al-Bukamal city for the third day in a row.” It shows an ISIL fighter speaking to the camera and claiming the Syrian army – despite being backed by the Russian air force – has failed to take control over the town.

Russian Defence Minister Sergei Shoigu congratulated “the heroes of the Syrian Arab army for their successes in liberating the city of al-Bukamal”, SANA said.

ISIL has met a series of defeats in Syria and Iraq after it made major advances across the two countries four years ago and declared its aim to build a caliphate.

In October, the Syrian Democratic Forces, an alliance of Kurdish and Arab opposition forces backed by the United States, pushed the group out of its de facto capital Raqqa in Syria.

In Iraq, government forces and allies recaptured Mosul, the group’s last urban stronghold in the country, in July. 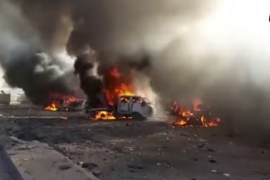 Fighters lose more ground with recapture of al-Qaim by Iraqi forces, after defeat in Deir Az Zor city across the border. 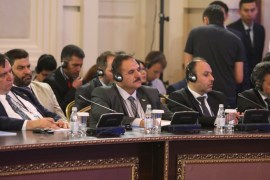 Opposition group says Russia cannot be trusted to mediate talks as it is fighting on the side of President Assad.