Ho Chi Minh, Vietnam – Dao Le Quynh Nhi still vividly recalls the festive mood she and her friends were able to soak up when they interacted with Barack Obama at a town hall meeting here, as part of his Vietnam trip last year.

“I had high hopes that his visit, among other things, would result in a positive outcome for the TPP,” she said, referring to the Trans-Pacific Partnership, a mammoth US-led 12-nation trade deal that Donald Trump nixed right after taking office.

According to a Pew survey in 2015, 89 percent of Vietnamese believe the otherwise controversial trade deal would be good for their country.

As Trump touched down in Vietnam on Friday for the Asia-Pacific Economic Cooperation (APEC) summit and a state visit, Nhi said, however, she could not care less about his trip. A native of the central Vietnamese resort city of Da Nang, the host city of the APEC gathering, she was asked by many of her friends whether she would come back home for the chance of seeing the new US president in real life.

“My answer is a resounding ‘no’,” said Nhi, a 25-year-old office worker. “I have no interest in Trump. He is not as inspirational and charismatic as Obama. Above all else, he killed the TPP.”

But despite Trump, Nhi said the influence of American culture and values on Vietnamese millennials such as herself has remained as strong as ever. “They have set an idealistic bar for a democracy and a civilised society that Vietnamese youth are yearning for.”

In a country where young people between 10 to 24 years represent almost one-third of Vietnam’s total population of nearly 93 million, Nhi finds herself the embodiment of the findings of another Pew survey in June, which corroborated the unwavering favourability among Vietnamese towards the US – no matter who reigns over that country.

According to the survey that spanned 37 nations, the image of the US has deteriorated sharply across the globe under the Trump presidency. It showed US favourability ratings in the rest of the world slumping to 49 percent from 64 percent at the end of Obama’s eight years in the White House.

Against that backdrop, popularity ratings have only increased in Vietnam and Russia. In Vietnam in particular, 84 percent of the respondents said they now have a very or somewhat favourable view of the US, up from 76 percent in 2014.

“Publics in the Asian-Pacific region are generally more positive toward American ideas and customs,” according to a report released along with the survey.

Seven in 10 Vietnamese say the spread of such American attributes is a good thing. Sixty-nine percent of Vietnamese surveyed like American democratic ideas, the highest rate after South Korea (78 percent).

“I don’t speak for everyone,” Nhi said. “But I believe few Vietnamese would disagree with me that we are still very much in awe of the US as a country. Just around me, many Vietnamese parents keep sending their kids to study abroad, with the US remaining the most-sought destination.”

There is further damning evidence of the continued American Dream in Vietnam. The country has broken into the top 10 on several significant indexes that encapsulate people’s desire to live, study, and settle down in the US, despite the fact it is one of the poorest and most faraway countries on those rankings.

Vietnam sent nearly 31,000 students to the US, ranking 5th among countries with the most students at American educational institutions. Vietnamese investors arrive second after China in the race for green cards issued under the expensive EB-5 visa scheme, which offers foreign investors a fast path to a green card by investing at least $500,000 to finance a business employing at least 10 American workers. (To put things in perspective, Vietnam’s average annual income was about $2,200 last year.)

Most recently, Vietnam ranked among top 10 foreign buyers of residential properties in the US.

Major Vietnamese megacities such as Hanoi or Ho Chi Minh are awash with Americano-philia. A get-together at Starbucks, a weekend treat for children at McDonald’s, or an overnight queue just to get the latest iPhone version: all are considered emblems of chic Americanisation and a tech-savvy lifestyle here.

Outside observers have always grappled to decipher the lack of bitterness towards the US among Vietnamese, even when their country was in the throes of a brutal war that cost more than three million Vietnamese lives – and even when Vietnam bore the brunt of the US’ trade embargo that crippled the country until 1995.

But to Vietnamese millennials, the reason is not hard to fathom.

“For people of my generation,” Tran Thuc Huyen, a 24-year-old master’s candidate in Washington, said, “we were not born at the time when America’s economic stranglehold took its toll.”

“What we’ve seen is the US efforts to make war reparations here in Vietnam, like offering education scholarships as part of its soft-power diplomacy,” said Huyen, who also attended the town hall meeting with Obama last year. “Meanwhile, if you look further north, China is still a major threat to us, despite more than 1,000 years of occupation.”

‘I feel bad for my countrymen’

Many in Vietnam had hoped the TPP would play a crucial role as a cushion for Hanoi against its giant northern neighbour. It is in this context that “Trump’s immediate scrapping of the TPP did much to unnerve the Vietnamese leadership, who saw the agreement as more than a trade deal, but as a strategic anchor for the United States,” said Zachary Abuza, a Southeast Asia expert at the National War College in Washington.

But still, Vietnam just cannot afford to alienate the American president, no matter how erratic his diplomacy is.

Last May, Vietnam’s Prime Minister Nguyen Xuan Phuc became the first Southeast Asian leader to pay an official visit to the White House, in a bid to gauge Trump’s policies towards the flashpoint South China Sea, tensions over which have put Beijing on a never-ending collision course with Hanoi.

“Vietnam has proven to be highly pragmatic in fostering early engagements with the Trump administration,” said Le Hong Hiep, a Vietnamese research fellow at the Iseas Yusof Ishak Institute in Singapore. “Vietnamese diplomats have also learned how to play along with Trump’s transactional diplomacy.”

Given his fixation on North Korea during his 12-day, five-nation Asia tour, analysts say they do not expect much to come out of the Vietnam visit but Trump’s “what are you going to do for us?” agenda.

To ordinary Vietnamese, their anticipation, too, is realistic.

Ngo Van Gia, a well-known Vietnamese writer, said he would still plan on taking to the streets in Hanoi, hoping to catch a glimpse of Trump, just like he did last year when Obama was there.

“But this time, I don’t have any hope in Trump,” said Gia, 59. “He’s transactional and unreliable and so is his policy. I just want to see him out of curiosity.”

Gia, who lived through the Vietnam War, said he feels sympathetic towards any Vietnamese who look forward to a visit by an American president – be it Bill Clinton, Obama or Trump – as a beacon of hope for a watershed change in their country.

“I feel bad for my countrymen, myself included,” Gia said. “That’s just indicative of how desperate we are.”

His stance reverberates with that of Nhi, the office worker, a rare occasion in which the young and old generations are on the same page when it comes to political issues in Vietnam.

“It’s just like a poor kid at the lower rank of the social ladder with few options,” Nhi said. “We, as a small country, have no choice but to constantly look for a major power for protection.” 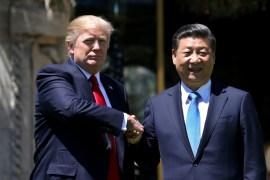 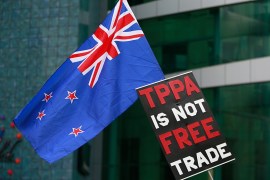 What’s next after the US withdrawal from the TPP?

The Pacific countries will continue negotiating regional economic arrangements without the US.