Yangon, Myanmar – As the sun set and shops and offices closed for the day, Maha Bandoola park started to fill with people.

Some were here on Tuesday to enjoy the green grounds, a small refuge from the noise and chaos of downtown Yangon.

But many more arrived for an inter-faith prayer event organised by the ruling party, the National League for Democracy (NLD), held outside the City Hall building across the road.

The event was called “Peace in Myanmar – Ceremony for Inter-Faith Prayers.”

Critics say it’s not difficult to view the inter-faith prayer events as nothing more than public relations exercises.

It was the last in a series of events in the country amid a crisis in the western Rakhine state from where more than 600,000 Rohingya have been forced to flee into neighbouring Bangladesh.

The crisis erupted after a group of armed Rohingya fighters attacked border posts and an army base on August 25, killing 12 security officers and provoking a fierce crackdown by Myanmar’s military.

Since then, hundreds of Rohingya civilians have been killed by security forces, women and girls raped, and villages torched.

Myanmar’s government has blamed misinformation for distorting the crisis.

In the words of Nyan Win, the NLD’s spokesperson, Tuesday’s event was held so people can pray for peace in the country, and to show that Myanmar is a “multi-religious and diverse society”.

Religious leaders from different faiths took to the stage, in turn, to lead the group in prayer and some delivered speeches, preaching harmony and doing right by others.

“It’s what good citizens should do. This event can help us achieve unity. It’s important to have open communication with people of other religions so we can have a good relationship with them,” Khin Marlar Htwe said.

Sann Aung, a lawyer, said he welcomed inter-faith gatherings as opposed to events organised by hardline nationalists in Myanmar, which he said only “attacked people”.

Pro-military rallies have been held across the country recently; they have criticised Myanmar’s de facto leader, Aung San Suu Kyi, and painted the majority-Muslim Rohingya in Rakhine as a group of “extremists” intent on creating an Islamic state.

For an event held partially in response to the violence in Rakhine state, there was no mention of the Rohingya at Tuesday’s gathering.

The minority rendered stateless, persecuted and unwanted in Myanmar, don’t have many champions here.

Local reporters who write about the military crackdown in northern Rakhine say they’ve been on the receiving end of hate speech and threats from nationalists.

The Myanmar government and military have denied the accusations. The counter-offensive targets “terrorists” identified as the Arakan Rohingya Salvation Army, they say.

But the bare denials and the government’s assertion that the crackdown is a legitimate response to “terrorism” hasn’t stopped the influx of Rohingya refugees into Bangladesh. 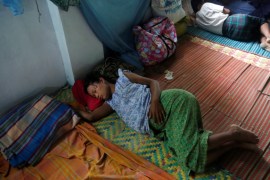 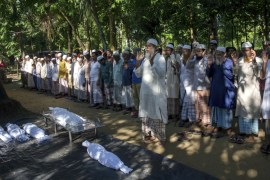 Rohingya running out of space to bury their dead

In the overcrowded refugee camps of Bangladesh, Rohingya refugees are running out of space to bury their dead.