Schools closed on Wednesday, the second day of the fog crisis, and will remain shut until Sunday.

Pollution trackers suggest the fog has reached the worst level so far this year, and is so high that breathing in air has been compared with being worse than smoking 50 cigarettes a day.

In neighbouring Pakistan, too, flights were cancelled in Lahore, school times were delayed and hospitals overflowed.

In New Delhi, smog levels of PM 2.5, the particles most damaging to health, have reached 40 times the World Health Organization’s safe limit.

Arvind Kejriwal, the chief minister of Delhi, was quick to comment on the worsening pollution situation in the capital.

“Every year this happens during this part of year. We have to find a solution to crop burning in adjoining states,” he said, referring to smoke caused by the burning of crops in the northern Indian states near Delhi.

An estimated 35 million tonnes are set afire in Punjab and Haryana every year, which contributes to the haze and smog in New Delhi.

We are approaching what is known as the “fog season”. This occurs as the northeasterly monsoon draws in cool, dry air from the Himalayas.

Because the air is cool. It is also denser than warm air and as such is stable.

That stability means that the air pressure will tend to rise over the northern plains of India. High pressure acts like a lid on the atmosphere and traps any pollution in the atmosphere.

Unfortunately, not only have we just had the fireworks from the recent Diwali festival, we also have a huge amount of stubble [crop] burning at this time of year.

How long will it go on?

Occasional bouts of rainfall will offer some relief.

However, the season goes on throughout the winter, right into February or sometimes later when the lengthening days and warmer sunshine finally start to have an affect on the local climatic conditions.

What are the effects?

The World Health Organization (WHO) says on its website, on a page regarding India: “Air pollution is a major risk factor for heart disease, stroke, chronic obstructive pulmonary disease (umbrella term for several progressive lung diseases including emphysema) and lung cancer, and increases the risks for acute respiratory infections and exacerbates asthma.”

At least 1.5 million people died from the effects of air pollution in India in 2012, according to WHO data.

According to the Lancet medical journal, burning solid fuel for cooking released the PM 2.5 pollutant and killed 500,000 people in 2015. 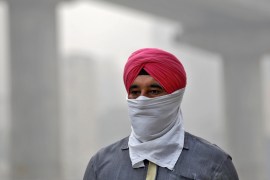