Recent developments in Saudi Arabia – including the sacking and detention of senior ministers and princes, and the televised resignation of Lebanese Prime Minister Saad Hariri from Riyadh – come in the context of a regional power play by Saudi against Iran, analysts say.

Hariri’s resignation occurred just hours before dozens of Saudi princes, ministers, businessmen and religious scholars were arrested under orders from Crown Prince Mohammed bin Salman. In announcing his decision to step down, Hariri, who heads the Sunni-majority Future Movement party, blamed interference in Lebanon by Iran and its Lebanese ally Hezbollah.

Al Jazeera explores who the key players are and how the situation reached this point.

What is Hariri’s connection to Saudi Arabia?

Hariri’s business and political links to Saudi Arabia stretch back to his father, Rafik Hariri, a business tycoon and former prime minister who was assassinated in 2005, a year after resigning his premiership.

“Saad Hariri inherited his father’s business across the kingdom, including partnerships and financial ties with some of the princes included in the purge,” said Ibrahim Halawi, a lecturer in contemporary Middle East politics at the Royal Holloway University in London.

The government in Riyadh wanted to “kill two birds with one stone”, Halawi told Al Jazeera – consolidating power locally, “which required moving Hariri to Riyadh and allegedly – according to some Lebanese local reports – taking over his assets … [while] simultaneously attempting to shake Hezbollah’s comfortable seat in Hariri’s ‘unity government’.”

Hariri’s prime ministership lasted barely a year after a prolonged political deadlock left Lebanon without a president for more than two years and without a parliament for 11 months.

The government was an unusual national unity coalition of pro- and anti-Syria government parties, including Hezbollah and Hariri’s Future Movement.

But this underscored for Saudi Arabia the dangers of a coalition composed of parties with opposing interests, particularly when Hezbollah appeared to hold the most sway. Hezbollah has embroiled itself in Syria’s civil war as a staunch ally of President Bashar al-Assad, alongside international allies Russia and Iran.

What is behind the anti-Hezbollah sentiment?

Hariri accused Iran of fomenting “disorder and destruction” and meddling in the internal affairs of Lebanon and other Arab states. He described Hezbollah as “Iran’s arm” in Lebanon, noting: “They have built a state within a state.”

Hariri’s resignation speech echoed a tweet by Saudi Minister of State for Gulf Affairs Thamer al-Sabhan, who had met Hariri a few days earlier. In his tweet, Sabhan said: “The hands of treachery and aggression must be amputated” – a reference to Hezbollah and Iran.

“Lebanon after [Hariri’s] resignation will not be like it was before,” he tweeted on Monday. “It will not accept being used as a platform to spring terrorism onto our countries. It is up to their leaders to decide whether they want to be a peaceful or terrorist state.”

Lina Khatib, head of the Middle East and North Africa programme at Chatham House, told Al Jazeera that Hariri’s resignation from Riyadh was a clear sign that Saudi Arabia is no longer “willing to accommodate Iranian influence” in Lebanon.

“The announcement of the resignation from Riyadh sends the message that Saad Hariri is firmly aligned with Saudi Arabia, making his resignation more of an episode in the Saudi-Iranian rivalry than an internal Lebanese affair,” she said.

Khatib noted that Hariri’s position in a government with Hezbollah representatives was “not sustainable”.

“Instead of being able to stand up to Iran’s interests from within the government, he was becoming increasingly closer to accommodating those interests,” she said.

What will happen to Lebanon’s government?

In a televised speech, Hezbollah leader Hassan Nasrallah rejected claims of Iranian meddling and said the decision was “Saudi-imposed”. He went on to denounce the tone and text of Hariri’s speech and questioned the motive behind the surprise resignation.

In light of Hariri’s resignation, the current national unity government is likely to fall, leaving the country facing an “indefinite period of political vacuum,” Khatib said. Being one of the country’s strongest political parties, Hezbollah is still a “tool for realising Iranian interests” in the region, she added.

Firas Maksad, deputy executive director of Arabia Foundation, told Al Jazeera that as the dominant power in Lebanon, Hezbollah has “the most to lose and would rather remain focused on their fight in Syria”.

“One plausible scenario has Lebanon limping along with a caretaker government, unable to form a new cabinet without securing the approval of Hariri’s Future Movement,” he said.

Though there is little doubt that Saudi Arabia enjoys “significant influence in Lebanon”, there are also domestic factors, he said.

“Hariri entered into a coalition government with Hezbollah on the basis of a political compromise, which steadily eroded over the past year,” Maksad said.

“Instead, Hariri’s continuation in government came to provide political cover for Hezbollah’s activities, including its deepening military involvements in Syria, Yemen and Iraq, regular verbal assaults against Saudi Arabia, and its recent pressuring of the Lebanese government to restore diplomatic ties with the Assad regime.”

Who has the regional advantage?

Iran’s influence in the region has significantly increased over the past few years, particularly in the context of limiting the expansion and influence of the Islamic State of Iraq and the Levant group (ISIL, also known as ISIS). In Iraq, Iranian-backed Shia-dominated paramilitaries known as the Popular Mobilisation Forces have been dubbed as the country’s second – and stronger – army.

In Yemen, Saudi remains deadlocked in a war waged since March 2015 against the Iranian-backed Houthi rebels, who have been fighting against the Saudi-backed central government.

“The Saudis are clearly stepping up their zero-sum rivalry with Iran throughout the region,” Ali Vaez, an Iran expert with the International Crisis Group, told Al Jazeera. “Iran has had the upper hand so far in the competition over regional influence, but the Saudis are hoping that the Trump administration would tilt the balance in their favour.”

One example of that, Halawi noted, is the US attempt to increase pressure on Hezbollah.

“The US is trying to tease Hezbollah’s high ground through its recent wave of sanctions against its funders and members, and pressuring the Lebanese financial establishment to fully comply with the sanctions strategy,” he said.

Who is leading the charge in Saudi?

Khatib noted that the recent upheaval in Saudi Arabia aims to consolidate the authority of Crown Prince Mohammed bin Salman, empowering him to set the country’s foreign policy agenda.

The probe, which has purged Saudi royals, senior ministers and businessmen, appears to be widening, while it remains unclear whether Hariri will return to Lebanon.

Over the past year, Mohammed bin Salman has become the ultimate decision-maker for the kingdom’s military, foreign, economic and social policies, championing his “Vision 2030” plan, which includes subsidy cuts, tax hikes and sales of state assets.

According to Luciano Zaccara, a Gulf politics researcher at Qatar University, the events of the past few days are a testament to Mohammed bin Salman’s ability to lead the fight against Iran and its allies.

“The coincidence with the internal changes in Saudi proves that the succession towards Mohammed bin Salman is approaching, and that Saudi needs to make sure that nobody will challenge the legitimacy of Mohammed bin Salman as the new ruler, neither internally nor regionally,” Zaccara said.

“For that, proving that Saudi has leverage in other countries, such as Lebanon, and that they can prevent the Iranian influence to extend there is an asset for Mohammed bin Salman, to demonstrate his external power, which is coupled internally with the fact that he is eliminating any possible internal challenge to his authority once the transition is done.” 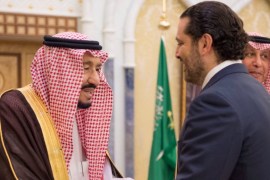 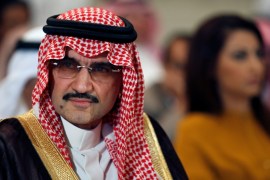