In the Turkish city of Antalya, delegates from 190 countries gathered to discuss safety concerns and challenges faced by humanitarian workers and volunteers in the field.

The evolving nature of conflict and disaster zones, access to affected people, and funding were also deliberated.

But the long-standing question of whether humanitarian aid is helping to prolong conflicts such as those in Syria, Yemen and elsewhere, remains.

Al Jazeera spoke with Peter Maurer, president of the International Committee of the Red Cross (ICRC).

Al Jazeera: What challenges do you face and how will you overcome them?

Peter Maurer: In today’s conflicts, there are of course multiple challenges in accessing besieged areas and populations we can’t reach. The first and foremost challenge is access to security for humanitarian workers.
This relates to existing or non-existing neutral and impartial space for humanitarian action but instead what we see today is an increase in what we call politicisation of the humanitarian space.

This is a big preoccupation for an organisation like ICRC, which is basically designed to be the front line operator of the Red Cross and Red Crescent movement.

Al Jazeera: But are you impartial? Local committees have been criticised in various parts of the world for only providing aid to where state or non-state actors allow them …

Maurer: We need to engage with all parties in a conflict, so we have to have access to all sides to explain what we are doing. At the end of the day, we have to be accountable to those who have political power on the ground, and accountability means transparency on what exactly we are doing.

We need to explain that what we are doing is needs based and not policy based and does not have a political bias. And this needs much more, which is very frankly the reason why ICRC was founded 150 years ago.

In conflicts, it’s very difficult for the Red Cross or Red Crescent to be on both sides of the front line. It’s much easier for the ICRC as the international component of the movement to try to negotiate that space in order to recreate the space.

But again, this means that ICRC will engage with all sides to negotiate, to make our people on the ground more aware so that we better know the actor so that we can talk to them.

Sometimes it is the civil society – the people on the ground – who defend us, because they talk to the fighters and are able to rein them in in certain circumstances.

So there is a multiplicity of activities that we are entertaining and that we are changing a little bit the way we are working even the big challenges that we are facing.

Al Jazeera: How would you respond to the criticism that the use of humanitarian work as a weapon of war has helped authoritarian governments remain in power?

Maurer: When the ICRC was founded in the 19th century, this was exactly the debate the organisation faced. The criticism that we generated as an organisation was that we would prolong war instead of abolishing it. I think today we are more aware of the situation.

We can’t escape the humanitarian imperative of helping people survive in the most difficult circumstances. We can’t really defend ourselves when governments and non-state armed groups manipulate our humanitarian work.

What we can do is to work well on the ground and to do what is needed and not allow ourselves to be manipulated in a way that results in people misinterpreting and misrepresenting our humanitarian work.

I have a good conscience when I see what we are doing. We are still doing the very minimum of saving lives, stabilising people, and bringing people together. That’s classical humanitarianism. People are very critical when they say we are prolonging war, we let ourselves be manipulated.

At the end of the day we know that’s what happens in war. But look at the facts, and the facts say we are saving lives of people.

Maurer: At the ICRC, we are the ones who are responsible for the security of our own staff members and for the volunteers in the movement. I think we do a lot of training and offer a lot of support for the families of volunteers or workers who have been killed.

It is a tragedy that we have seen unfolding by the totalitarian way warfare has evolved that resulted in more and more our colleagues being victims of attacks.

Health workers and hospitals are victims of attacks. And it challenges us not only in our education but also in how we respond to some of those crises.

It puts us in front of a dilemma every day. Do we look for the maximum security of our people or do we go into a context in order to save lives of civilians? It’s a dilemma which is with us each and every day which forces us to take hard and critical decisions.

Al Jazeera: Conflicts are expanding and impartial space is shrinking. What are your fears for the years to come and is there any hope?

Maurer: ICRC statistics show that violations of international humanitarian law are being carried out almost equally by state and non-state actors in the largest conflicts of the world.

I fear we will continue with the dynamic of war and violence, but I am a little bit hopeful when I look at our dialogue with state and non-state armed groups. I think there is a rising awareness that it can’t go on as it has gone on over the last couple of years, particularly in the Middle East, and that we have to change course.

The change of behaviour comes with respect for international humanitarian law, which has been disregarded by many as outdated. 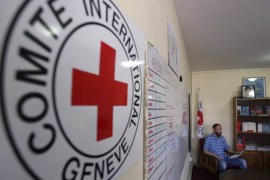 The aid agency’s decision to downsize its activities comes after series of fatal attacks targeted its staff. 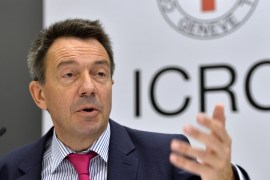 Peter Maurer: Why the Red Cross talks to ‘terrorists’

The president of the Int. Red Cross discusses its mission and how to stay neutral in the face of armed conflict.