The documentary looked into the Philippine President Rodrigo Duterte’s first few months in office as he carried out his war on drugs and corruption.

Duterte sat down for an exclusive interview with Al Jazeera’s Chao to talk about his controversial domestic policy, as well as Manila’s warming relations with China.

The Philippine president defended his anti-drug war policy, which at the time of the interview had left more than 3,500 people dead.

He also admitted that children and innocent people had been killed in the bloody crackdown, calling them “collateral damage”.

The documentary was a follow-up on an earlier special report on the improbable presidential campaign of Duterte, then mayor of the southern Philippine city of Davao.

So honoured to have won an #AIB award for our coverage of the Philippine President. Kudos to the @AJ101East team. https://t.co/ZJDi2k38j4 pic.twitter.com/xFFgTI3nFz

Science Editor Tarek Bazley’s report on Antarctica followed scientists as they looked into how warming weather in the region affected the wildlife and the rest of the world.

From December 2016 to March 2017, Al Jazeera followed the Swiss Polar Institute as they circumnavigated the continent.

The resulting report was the interactive and multi-media report, A Voyage to Antarctica.

Commenting on the two awards, Giles Trendle, managing director of Al Jazeera English, said the awards are “a testament to the quality of our journalism and the talent of our teams”.

“They show Al Jazeera English is competing with, and beating, the very best in the news and current affairs market,” he said.

“It is additionally gratifying to see our journalism receive such recognition from our peers in a world in which journalism is under attack.”

The AIB is a broadcasting industry association with members from around the world. 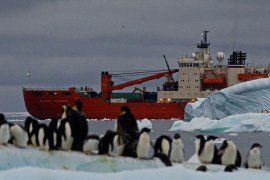 Antarctica on the edge

earthrise sets off on a month-long journey around Antarctica to study the effects of climate change on the continent. 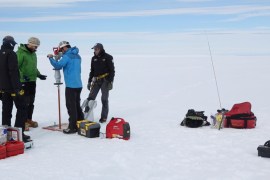 Into the wild of Antarctica: Scientists, robots and ‘pancake ice’