Turkey on Sunday suspended non-immigrant visa services at all Turkish diplomatic facilities in the United States, in a tit-for-tat move amid escalating tensions between the NATO allies.

Just hours after the US mission to Turkey announced it was restricting visa services, saying that recent events had forced it to “reassess” Ankara’s commitment to the security of US facilities and staff, the Turkish embassy in Washington, DC, hit back with an almost identical statement.

READ MORE: Is the US undermining its alliance with Turkey?

“In order to minimise the number of visitors to our Embassy and Consulates while this assessment proceeds, effective immediately we have suspended all non-immigrant visa services at all Turkish diplomatic facilities in US,” read its statement on Twitter, echoing the earlier US announcement.

A first version of the Turkish statement had said the measure would apply “to visas in passports”.

But a later version said the measure “will apply to sticker visas as well as e-Visas and border visas”, leaving open the question of whether US travellers who already have visas would be allowed to enter Turkey.

The earlier US statement, meanwhile, said it was suspending the processing of “non-immigrant” visas, a specific category that relates to tourism, medical treatment, business, temporary work or study.

Immigrant visa services are for those seeking to live in the US permanently.

Statement from the Turkish Mission to the U.S., October 8, 2017 pic.twitter.com/4i0BwInOCj

The escalation in diplomatic tensions comes a few days after the arrest of a US consulate employee in Istanbul for alleged links to Fethullah Gulen, a US-based Muslim leader blamed by Ankara for a failed coup attempt last year. Gulen denies involvement.

Washington said it was “deeply disturbed” by the employee’s arrest.

It said he was arrested late on Wednesday on charges of espionage and attempts to damage the constitutional order and Turkey’s government.

Al Jazeera correspondent Sinem Koseoglu said this is the first in Turkey-US bilateral relations since 1960s. “I am expecting Turkey not be willing to escalate the tension,” she said.

Turkey has pressed, so far in vain, for the US to extradite Gulen, while tensions have also risen over Washington’s military support for Kurdish YPG fighters in Syria.

The YPG group is considered by Ankara to be an extension of the banned PKK, which has waged an armed campaign for three decades in southeast Turkey.

“It’s clear that this [suspension of visa services] is just one more ratcheting up of the war of words between the US and Turkey,” Al Jazeera’s Tom Ackerman, reporting from Washington, DC, said.

Ackerman said that Turkish authorities “had imprisoned more than a dozen American-Turkish citizens” living in Turkey over the past year or so, including an Izmir-based Christian pastor.

Missionary Andrew Brunson, who ran a church in the western city of Izmir, has been held by Turkish authorities since October 2016 on charges of being a member of Gulen’s group.

“You can see that this more than just the accusations about one man in the Istanbul consulate,” Ackerman said.

Al Jazeera’s Diane Eastabrook, also reporting from Washington, DC, said the escalation comes just a few months after a visit by Turkish President Recep Tayyip Erdogan to the US, in which he reaffirmed friendly ties between the two countries.

“Turkey is a strategic ally to the US,” she said.

“It’s a NATO ally, and there is a NATO base in Turkey which the US uses. As the US continues with its war against ISIL, it needs to have that presence in Turkey and it needs those close ties with this very important ally,” Eastabrook added.

“This [diplomatic tension] has repercussions throughout Europe and the Middle East, so it will be interesting to see how this plays out over the next few days,” she added. 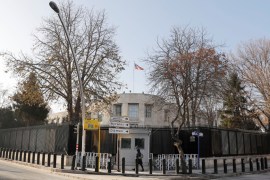