The Taj Mahal is one of the Seven Wonders of the Modern World, attracting more than six million tourists a year.

Although the monument attracts more tourists than any other site in India, it seems it is out of favour with the government of Uttar Pradesh (UP), where it is located.

The iconic monument, a UNESCO world heritage site considered a “symbol of love”, was not featured in the tourism booklet issued by the UP government last week.

The 32-page booklet titled “Uttar Pradesh Tourism: Its High Potential”, released by Rita Bahuguna Joshi, state tourism minister, mentions a number of Hindu and Buddhist religious places, but misses one of the world’s most famous monuments.

Sohail Hashmi, writer and a heritage expert, accused the ruling Bharatiya Janata Party (BJP) of playing politics over the Taj.

“The BJP has come to power on the basis of the discourse that only things that are identified as Hindu are Indians. Taj does not fit into their idea of culture,” Hashmi told Al Jazeera. “They have divided our heritage into Hindu heritage and Islamic heritage.”

Built in the 17th century

The stunning white marble mausoleum was built in the 17th century by Mughal King Shah Jahan in memory of his wife, Mumtaz Mahal in Agra, about 200km from the Indian capital, New Delhi.

Joshi has denied there was an attempt to ignore Taj Mahal as a tourist destination.

“How can anyone in the tourism sector ignore the Taj Mahal, one of the big tourist attractions in the country?” said the minister, adding that the government was committed towards the development of Taj and tourist sites associated with it.

But her boss, Yogi Adityanath – a monk known for his anti-Muslim bigotry – is not fond of the Taj.

He has in the past said that the Mughal mausoleum is not part of India’s culture and claimed that the mausoleum was a Hindu temple.

Replying to a petition by Hindu groups, government archaeologists told the Supreme Court in August that the monument was indeed a Muslim tomb and not a temple.

Since he took over as the chief minister of India’s most populous state in March, Yogi has pushed for Hindu festivals and religion despite India being a secular nation.

The central government of Prime Minister Narendra Modi, who belongs to the BJP, has also been accused of rewriting history textbooks, including those concerning the medieval period when Muslims ruled over India.

As part of this, roads named after Mughals have been renamed and Muslim rulers, who have been accused of reaping “holocaust” on Hindus, have been demonised.

Rashtriya Swayamsevak Sangh (RSS), the ideological parent of the BJP, considers Muslims and Christians as outsiders, and has been at the forefront of the campaign to rewrite history textbooks.

“For the BJP, the understanding that anything that has happened in this country over the last thousands of years has no connection with a clear definition of Indian culture,” Hashmi said.

“What makes India such a vibrant place is its phenomenal diversity.”

Despite repeated attempts, BJP spokespeople could not be reached for comment.

An expressway built by the previous state government to connect Agra to New Delhi did little to boost tourist numbers.

“We care very little for our heritage. Over several years, heritage conservation and culture have been getting less than 0.1 percent of the national budget,” Hashmi said.

Businessmen in the city are baffled by the decisions over the Taj.

Rajeev Tiwari, President of the Federal of Travel Association in Agra, says that the monument is not the state government’s priority.

“More than 400,000 people are directly or indirectly get employment because of Taj. Tourism is important for the economy of Agra,” he said.

“If we play politics and ignore it, then tourist number will further drop. It will not only be a loss to Agra but also affect the revenue of the state.”

More than 20 percent UP’s tourism revenue comes from tourism related to the Taj, according to the CNN-IBN news channel.

Tiwari says that the Taj should not be made into a “sectarian issue”.

“It is a monument of love, and it should be seen that way,” he said. “Anywhere in the world, when the name of India comes, the first thing that people ask is Taj Mahal. It is a symbol of India.”

But Tiwari’s fears are not unfounded.

India’s numerous 24/7 news channels have conducted hours of debates that exposed the divide over the monument.

In a discussion on CNN-IBN news, BJP spokesperson Anila Singh justified dropping the Taj Mahal from the booklet.

“Days of all those people who have crushed the feelings of Hindus has come to an end. What Hindus want we are going to do that,” Singh said.

Abhishek Manu Singhvi, spokesman of the main opposition Congress party, is among those who have criticised Yogi’s government for the omission.

“If it is a booklet on tourism and it excludes Taj Mahal, at one level it is a joke and at another level it is tragic. It is like saying we will have (William Shakespeare’s) ‘Hamlet’ without the Prince of Denmark,” Singhvi said.

“If it is indeed a booklet on tourism and excludes the Taj, it shows a clear religious bias which is completely misplaced,” he added.

“Development of religious sites is welcome, but in a multicultural societies, such as India, you can’t focus on one area, you have to focus on all,” he said.

“Our shared culture cannot be ignored especially in UP. Development has to be for all. Development should not be linked to any particular religion.”

Many say Yogi has resorted to divisive issues to cater to his hardline Hindu base, while others accuse him of being inept.

“The trouble with this man is that he has still not decided whether he is the head of the temple or the head of the UP government,” said Sharat Pradhan, a senior journalist in Lucknow, the capital of UP state. 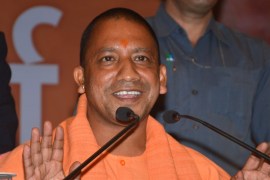 The fall and rise of India’s Yogi Adityanath 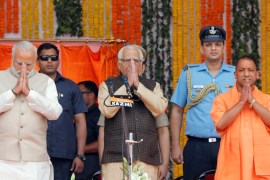