The life and legacy of Ernesto Guevara de la Serna is in focus this week 50 years after his death on October 9, 1967.

Al Jazeera examines Ernesto “Che” Guevara: the man, the revolutionary, and his legacy.

He had a left-leaning, and literary, family life before beginning his studies in medicine at Buenos Aires University in 1948.

Two years later, Guevara started the first of two motorcycle journeys through Latin America which in successive years would help shape his political views and sense of purpose.

Guevara became convinced during his journeys – 4,500km and 8,000km respectively – that the solutions to the widespread poverty and oppression he had witnessed were armed revolution and communism.

After briefly returning to Buenos Aires to complete his degree in 1953, the newly titled Dr Ernesto Guevara left Argentina, and later a career in medicine, to pursue a political future which would see him feature in revolutions from Cuba to Africa’s Congo.

Guevara is known for his role in the Cuban revolution of 1959, which witnessed Fidel Castro’s removal of Fulgencio Batista as the country’s head of state.

The two first met in Mexico City almost five years earlier, where Guevara had moved in 1954.

Having joined Castro’s “26th July Movement”, aimed at seizing power from Batista, Guevara rose to become a key figure in the revolution and was duly appointed as president of the National Bank of Cuba and minister of industry following its success.

From this positon, he was able to roll out domestic plans for land redistribution and the nationalisation of Cuban industry. He travelled around the world as an ambassador for the country.

Guevara guided the Castro government towards closer alignment with the Soviet Union through his diplomacy, which would prove a crucial relationship for Cuba throughout the Cold War as Castro sought to prevent the United States from interfering in the country.

Six years after the revolution, Guevara left Cuba in order to spread Marxist revolt elsewhere. He arrived in Congo in 1965 and attempted to mobilise armed rebels forces there against the Congolese central government. His efforts failed within seven months.

By the end of 1966, after a brief return to Cuba, Guevara had switched his attention to Bolivia and a revolutionary movement against the government there. However, less than a year later Guevara was captured by US-backed Bolivian forces on October 8. He was executed the next day, aged 39.

Lauded by some, lamented by others, Guevara’s name has become synonymous with rebellion, revolution and socialism.

Critics point to his role in a Cuban government which oversaw extrajudicial killings and political repression as evidence of the damage caused by his dogmatic faith in communism.

Supporters say he was a hero who fought and died for his beliefs, and see him as a romantic figure associated with the universal fight for freedom.

Regardless of his contested history, Guevara’s face has become an international popular culture icon.

But his legacy in Latin America continues to be felt in a more literal way.

In countries including Bolivia, Cuba and Venezuela, governments continue to draw inspiration from Guevara, shaping the lives of Latin American people.

Here is a selection of words that belong to Che.

“If you tremble with indignation at every injustice, then you are a comrade of mine.”

“I don’t care if I fall as long as someone else picks up my gun and keeps on shooting.”

“The revolution is not an apple that falls when it is ripe. You have to make it fall.”

“I am not a liberator. Liberators do not exist. It exists when people liberate themselves.”

“Do not shoot! I am Che Guevara and worth more to you alive than dead.” 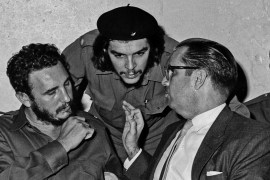 A legendary friendship borne of youth and revolutionary zeal eventually succumbs to the strains of Cold War realpolitik. 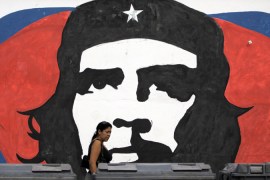 An Irish city’s plan to erect a monument to the revolutionary icon has piqued conservatives.