Turkish forces have clashed with Hay’et Tahrir al-Sham fighters in Idlib province on the Syria-Turkey border, activists and a monitor reported.

The Syrian Observatory for Human Rights, a Britain-based war monitor, said on Sunday that the Turkish troops exchanged fire with the rebel alliance near the village of Kafr Lusin.

In 2016, however, it changed its name and broke formal allegiance to the global movement founded by Osama bin Laden.

Rami Abdulrahman, head of the Observatory, told Al Jazeera that the rebel alliance was sending reinforcements to the border area.

“Turkish forces are not on Syrian soil yet,” Abdulrahman said, adding that army was firing artillery shells across the border, while the rebel alliance attacked a Turkish military base.

Speaking to Al Jazeera from Idlib, Musa Khaled, commander of the 13th division of the Free Syrian Army, confirmed that shells had been fired.

“Yes, there was heavy fire. Tahrir al-Sham hit a Turkish bulldozer on the border, so Turkish troops responded with fire. But things have calmed down now,” Khaled said.

Al Jazeera could not immediately confirm the reports.

On Saturday Turkish President Recep Tayyip Erdogan said Syrian rebels backed by Turkish forces would launch an operation in that area, which is mostly controlled by Tahrir al-Sham.

The push on Saturday came as Turkey along with Russia and Iran prepared to set up a so-called “de-escalation” zone in Idlib province, in line with deals in talks in Kazakhstan’s capital, Astana, aimed at ending the Syrian civil war.

Idlib is largely held by the Hay’et Tahrir al-Sham alliance, which was not part of the talks and has rejected the implementation of a de-escalation zone.

Al Jazeera’s Hashem Ahelbarra, reporting from Gaziantep in southern Turkey, said this is likely “going to be a very long military operation”.

“Phase two, which is going to be the most crucial, is when the Turkish army starts its operation inside Syria, particularly around and inside Idlib,” he said.

“It’s going to be the most delicate operation for the Turkish military inside Syria since the start of this conflict.”

Meanwhile, the Syrian army and its allies encircled the ISIL bastion of al-Mayadeen in Deir Az Zor province in the country’s east, a Syrian military source said on Sunday.

Government forces, allied militias and Russian aircraft have stepped up the fight against the Islamic State of Iraq and the Levant (ISIL) in Deir Az Zor in de past days, reportedly killing scores of fighters, including foreign mercenaries.

Russia’s defence ministry on Saturday said its forces killed about 120 ISIL (also known as ISIS) fighters and more than 60 foreign mercenaries in a series of air raids in al-Mayadeen and near the border town of Al Bukamal, also in Deir Az Zor.

Many of mercenaries came from the former Soviet Union, Tunisia and Egypt, according to the ministry.

Al-Mayadeen is one of ISIL’s last bastions in Syria.

The advances against ISIL (also known as ISIS) in Deir Az Zor have cost a heavy civilian death toll from Russian and coalition air raids.

The Syrian Observatory for Human Rights said Russian aerial bombardment on Thursday night killed 14 people, including three children, fleeing across the Euphrates on rafts near al-Mayadeen.

Russia has not acknowledged any civilian deaths from its attacks since it intervened in Syria in 2015, and dismisses the Observatory’s reporting as biased.

Moscow has been carrying out air raids in support of its ally Damascus targeting both ISIL in Deir Az Zor province and rival groups led by al-Qaeda’s former Syria affiliate in Idlib province in the northwest. 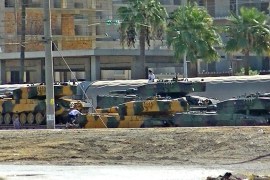