The blasts on Saturday evening sent a giant fireball into the sky above the eastern part of Accra, causing frightened residents to flee their homes in large numbers.

Police said the blasts happened in the Atomic Junction roundabout area of Legon, in northeast Accra, at about 7:30pm (19:30 GMT).

A statement from the Ministry of Information read out on local radio on Sunday said that seven people had been killed and 132 were injured. About half of them had already been treated and discharged, it said

The explosion began at a state-owned GOIL liquefied natural gas station and spread to a Total petrol station across the street, sending a giant fireball high into the night sky and forcing frightened residents to flee.

At least six fire trucks and more than 200 police personnel were deployed to help to cordon off the area of the blasts. Ambulances also arrived and those with various injuries were sent to the hospital.

Al Jazeera’s Ama Boateng, reporting from Accra, said that many people are feared dead as the blasts happened at “an extremely busy part” of the capital.

“This is a busy interchange and one of the main routes out of the city,” she said. “There are lots of buildings and a lot of people in the area, including many street sellers.”

Another explosion. Same place. Atomic Junction. PLEASE STAY AWAY. I felt the heat from 3 Kilometers away. It's crazy!!!! pic.twitter.com/8ZueUKGFb4

The filling station is also near a transport terminal and close to some hostels for the University of Ghana.

The Accra city authorities warned people to avoid the area.

Kobby Boateng, a computer programmer, said he had returned to the university campus with his girlfriend when the blast happened.

“All of a sudden, we heard a ‘boom’ and the flash of an explosion, which made the building just shake and the lights went out,” he told AFP.

“People were rushing out of their rooms. Some of them were naked and the heat that was coming from that blast, my God, it was unbearable.”

In June 2015, a blast at a petrol station near a busy downtown Accra intersection killed at least 90 people who were sheltering there from heavy rain and flooding.

A small unit on a tower building at Ghana’s parliament also caught fire in July, although the blaze did not cause major damage. 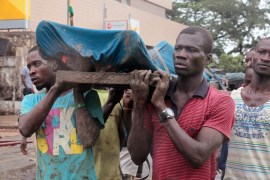 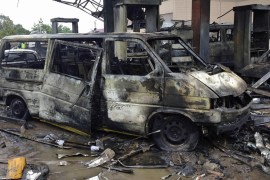 At least 90 people killed after explosion in capital Accra, blamed on floodwater sweeping stored fuel into nearby fire.