The United States has approved a $15bn deal to supply Saudi Arabia with the THAAD missile defence system, one of the most capable systems of its kind in the world.

If Congress does not raise an objection within 30 days, the deal will result in a massive windfall for Lockheed Martin, the world’s biggest arms producer.

The company and others like it internationally draw tens of billions of dollars in weapons sales to their own governments and foreign states. As well as making profits from war and military expenditures, arms manufacturers employ hundreds of thousands of people worldwide and form an important part of local economies.

According to the Campaign Against Arms Trade, a UK-based advocacy group: “The arms business has a devastating impact on human rights and security and damages economic development. Large-scale military procurement and arms exports only reinforce a militaristic approach to international problems.”

The following is a list of some of the world’s largest weapons manufacturers, sourced from data collated by the Stockholm International Peace Research Institute and published in 2016.

Based in the US state of Maryland, the company manufactures aircraft, radar systems, drones and even components for spacecraft for the US military and foreign states.

Its most famous products include the F-16 fighter plane and the Hercules transport plane.

Known mostly for its line of passenger aircraft, Boeing made $28bn of arms sales in 2015, resulting in a profit of $5.2bn.

The UK‘s largest weapons manufacturer had arms sales of $26bn in 2015, which formed 93 percent of its total sales.

BAE employs more than 82,000 people who help produce military equipment such as the Tornado warplane, Challenger tank, and drones for the British army and other states.

The company’s primary focus is producing missile and weapons systems for aircraft and naval vessels.

In 2015, Raytheon turned over almost $22bn in arms sales and made just over $2bn in profit.

Based in the US state of Virginia, Northrop Grumman produces drones, warplanes, aircraft components and radar systems.

Another Virginia-based company, General Dynamics produces the M1A Abrams tank, the main battle tank used by the US military.

Like Boeing, Airbus is popularly known for its line of passenger aircraft that are in service among airlines across the globe.

The company based in the state of Connecticut draws 16 percent of its sales from arms, which amounts to $9.6bn.

Its most famous product is the Black Hawk helicopter used by the US military and others.

What matters more in the arms trade – money or morals?

Canada’s probe of allegations that weapons it sold to Saudi Arabia were used against civilians reopens ethics debate. 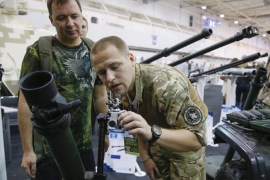 Who benefits from the growth in the arms trade?

Stockholm peace institute says weapons sales have soared in the past five years, especially to Asia and the Middle East.