Five Nigerien and three US special forces were killed and others wounded in an ambush on a joint patrol in southwest Niger.

The attack, which occurred on Wednesday night, marks the first US combat casualties in Niger, where Washington provides training and security assistance in the fight against armed groups in the Sahel region.

“We can confirm reports that a joint US and Nigerien patrol came under hostile fire in southwest Niger,” a spokesperson of the US Africa Command told Radio France International (RFI) by telephone.

According to RFI, the ambush took place after fighters from Mali attacked the village of Tongo Tongo in Tillaberi. A counter-operation was launched, but the US and Niger soldiers fell into a trap, according to the radio report.

Namatta Abubacar, an official for the region of Tillaberi, told Niger TV that five Nigerian soldiers were among the dead.

READ MORE: The re-emergence of AQIM in Africa

No group has yet claimed responsibility for the attack but the area is largely controlled by fighters, including members of al-Qaeda in the Islamic Maghreb (AQIM) and the Islamic State of Iraq and the Levant (ISIL, also known as ISIS).

African security forces backed by Western troops have been stepping up efforts to counter the armed groups, which are part of a growing regional rebellion in the Sahel region.

Presidents of the Sahel countries, including Mali, Niger, Mauritania, Burkina Faso and Chad, are working on final modalities to set up a G5 Sahel force to help fight the numerous groups that are active in the region.

In mid-September, the government of President Mahamadou Issoufou extended Niger’s state of emergency in force since March due to a threat coming from Mali.

Analysts said the deadly incident will not change Washington’s involvement in the fight against armed groups in the Sahel.

“For several years the US has been expanding its footprint in that area. They are there to train the indigenous forces and not to carryout raids. And I don’t see that changing because of this incident,” Martin Reardon, a former FBI officer and senior vice president of Soufan group – a security intelligence organisation – told Al Jazeera.

“This ambush will not have blowback in the Congress. Politically this incident will not become a hot potato in Washington or Niger,” Reardon said.

In mid-June, Niger mounted a new military operation in the Tillaberi region to take on the armed groups.

The United Nations later warned that the conflict in Mali was spilling over to Burkina Faso and Niger, after a significant surge of attacks in border areas. 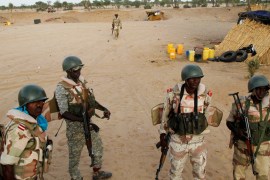 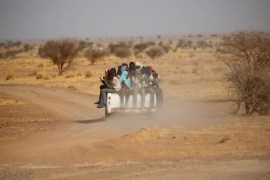 Official says 24 Libya-bound people rescued but dozens are believed to have died after being left without food or water.