An investigation carried out by an international chemical weapons watchdog has revealed the use of sarin gas in a March 30 attack that hit the rebel-held town of Latamneh in northern Syria.

The Organisation for the Prohibition of Chemical Weapons (OPCW), an independent body, told Al Jazeera that its fact-finding mission’s results prove the presence of “sarin or sarin-related chemicals”.

On Wednesday, the initial findings were shared with member states – all of whom are signatories to the United Nations chemical weapons convention.

The investigation into the March chemical attack in Hama province, in which some 50 people were injured, is ongoing.

Idlib-based activist, Majed Abdulnoor, told Al Jazeera that the use of chemical weapons is a “regular occurrence” in the country.

“Unfortunately, on top of sarin and mustard gas, the use of weaponised chlorine is also a grave violation that no one is talking about – not the media, and definitely not the international community,” Abdulnoor said.

“People don’t realise that these air strikes are chemical ones until they’re hit with the reality, and they start seeing the symptoms [mouth foaming, fainting],” he added.

The town had seen several other chemical attacks previously, including one that hit a local hospital just five days earlier, killing a doctor and his patient.

On April 4, days after the attack on Latamneh, Syrian government forces used the banned nerve agent in a separate attack on the rebel-held town of Khan Sheikhoun in Idlib. The attack killed some 87 people, and last month UN investigators determined the use of sarin gas.

Syria’s government has denied involvement and claims it no longer possesses chemical weapons following a 2013 agreement, under which it pledged to surrender its chemical arsenal.

The use of chemical weapons is strictly prohibited under international law.

Previously, former US President Barack Obama had said that the use of chemical weapons would cross a “red line”, but failed to follow through.

After the Khan Sheikhoun attack, the US had said that Syrian President Bashar al-Assad must be held accountable.

The UN report also found that the government forces were responsible for at least 23 other chemical attacks in the war-ravaged country since March 2013, in areas including the provinces of Idlib, Hama and eastern Ghouta.

At the time, UN investigators said they had found no evidence supporting Syrian and Russian claims that the chemicals had been released when an air raid hit an opposition weapons depot in the area, producing chemical munitions.

“Our voices on the ground are not being heard or acknowledged by the international community because that community is only interested in their own state affairs,” Abdulnoor, the activist, said.

“These investigations purposefully take a long time to reveal what is in fact already obviously true. If they [international community] wanted to hold Assad accountable, the investigation would have been concluded in a day,” he said.

“As long as the war continues to serve their agendas, these investigations will never change things on the ground,” he added.

Mazen Kewara, a Turkey-based surgeon with the Syrian American Medical Society (SAMS), explained that the international community cannot take action when such investigations are conducted for several reasons, rendering them obsolete.

“We [SAMS] provided OPCW with testimonies from doctors, wounded civilians, witnesses, and footage from Syria to help them reveal details behind several attacks,” said Kewara, who is based in the Turkish border city of Gaziantep.

“The reason these investigations take time is because they have a complex mechanism and protocol. The OPCW, in particular, is an autonomous body that works discretely,” he explained.

According to Kewara, several UN resolutions against the Syrian regime have been stalled by veto-wielding members of the Security Council.

“The main problem here is Russia and China’s support – these are delaying and preventing the international community from taking punitive measures against Assad’s regime,” he said.

A report on OPCW’s investigation will be available to the body’s member states and to the OPCW-UN joint investigative committee within few weeks.

Now in its seventh year, the Syrian civil war has killed nearly half a million Syrians, injured more than a million, and displaced over 12 million people from their homes. 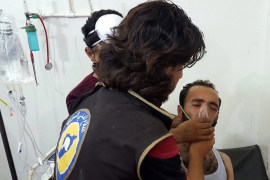 UNSC and international community must to be bold in the face of increasing use of chemical weapons in Syria and Iraq. 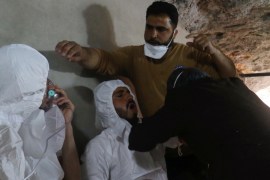