More than 300 protesters were arrested in St Louis in just 18 days, prompting rights groups and activists to decry unlawful force and indiscriminate arrests.

Mass protests erupted on September 15 after Jason Stockley, a white police officer, was found not guilty for the killing of Anthony Lamar Smith, a 24-year-old African American, in December 2011.

When protesters briefly blocked a highway on Tuesday night, heavily-armed riot police confronted them, according to local media reports.

“We don’t see a riot here. Why are you in riot gear?” protesters chanted. Others proclaimed: “Touch one, touch all.”

Schron said officers arrested 143 people on Tuesday alone. Among them were politicians, lawyers, religious clergy and other community members.

During Tuesday’s rally, Starsky Wilson, a 41-year-old pastor at Saint John’s Church in St Louis, was arrested for trespassing.

Referring to the ongoing protests, he explained: “The police continue to show up in riot gear even though there is no riot.”

Speaking to Al Jazeera by telephone, he added: “Police just determined that they were going to engage in mass arrests last night, and that’s exactly what they did.”

He added: “Unfortunately, in this community, we’ve seen such militarised policing that seeing riot gear is not uncommon any more.”

Bruce Franks Jr, a Missouri state representative from St Louis, was also arrested. He announced that he was about to be arrested on Twitter shortly before the police swept the demonstrators.

We getting locked up!

‘I’m going to kill this motherf***er’

Stockley, a white former police officer, was charged with first-degree murder in May 2016 and arrested at his home in Houston, Texas, where he moved in 2013 after he left the St Louis police force.

Stockley insisted that he killed Smith in self-defence.

Dashcam footage recorded during a three-minute chase shows Stockley saying: “I’m going to kill this motherf***er, don’t you know it”.

The video shows Stockley and his partner as they approached the vehicle. After Stockley yelled into the window, he opened fire and hit Smith five times. He subsequently claimed that he saw the driver holding a gun.

Prosecutors, however, argued that the Stockly had planted the gun in the vehicle after the fatal shooting.

Although Smith’s DNA was present on a bag of heroin found in the car, forensic testing of the gun detected only Stockley’s DNA on the weapon.

At Stockley’s request, his verdict was decided by a judge instead of a jury.

A week after the verdict, the American Civil Liberties Union (ACLU) of Missouri filed a lawsuit against the SLMPD over what it called “unlawful and unconstitutional actions” against demonstrators.

The lawsuit (pdf) accuses officers of indiscriminately using chemical agents, attempting to prevent filming of police actions and violating individuals’ rights while kettling the demonstrators into a small area.

Maleeha Ahmad, one of the plaintiffs in the ACLU-Missouri lawsuit, claimed police pepper sprayed her without warning.

“If it hadn’t been for my fellow peaceful protesters – strangers who came to my aid – I don’t know how my eyesight would be today. I would have been left out in the sun, on the ground, with my face burning,” Ahmad said in a statement released by the rights group.

At the time, police accused protesters of violence and illegal behaviour during the protests.

Alison Dreith, another plaintiff who says police pepper-sprayed her without reason, said that community members should be able to protest without the fear of “retaliation from law enforcement”.

“We should strive to be a place where every citizen feels supported by the communities we call home,” Dreith said in the statement.

“This is the vision that drives us into the streets and inspires us to hold our leaders accountable when they betray our values.”

‘In the heart of America’

Insisting that communities of colour never expected justice in the Stockley case, Reverend Wilson said they have nonetheless struggled to reconcile with the verdict.

“The officer had clearly stated his desire and intent to kill an individual before doing so,” he said, “and the officer’s DNA was the only one found on the weapon.”

Wilson, who has lived in St Louis for the last 17 years, explained that the anger in the streets is amplified by fresh memories of police killing unarmed African Americans in recent years.

In nearby Ferguson, a northern St Louis suburb, a white police officer was never charged for the August 2014 killing of Michael Brown, an African American teenager who was unarmed at the time he was shot dead.

It's important to remember that these pains and aches are happening in the heart of America. St Louis really is a central point for revolution and resistance.

According to the Guardian newspaper’s The Counted database, US police killed at least 1,092 people last year.

“It’s important to remember that these pains and aches are happening in the heart of America,” Wilson said.

“St Louis really is a central point for revolution and resistance. We saw that in 2014, and we see it again now.” 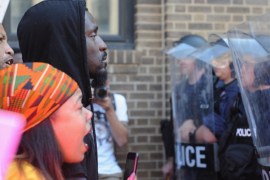 Protests erupt in St Louis after a white former police officer is found not guilty in the fatal shooting of a black man. 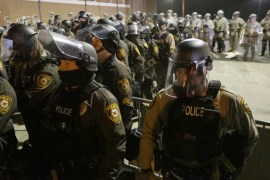 Trump lifts ban on arming US police with military gear

Police to be given easier access to high-calibre arms and tanks as US president revives controversial scheme.