Catalonia’s President Carles Puigdemont has accused the Spanish king of “deliberately ignoring millions of Catalans” by urging the region to end its bid for breaking away from Spain.

Puigdemont’s comments on Wednesday came a day after King Felipe VI urged state authorities to defend what he calls “constitutional order” in the wake of a banned referendum marred by police violence.

“The king has adopted the (national) government’s position and policies which have been disastrous with regard to Catalonia,” Puigdemont said in a televised address.

“He is deliberately ignoring millions of Catalans,” he added.

Leaders of the wealthy northeastern region of some 7.5 million held the vote on Sunday in defiance of the central government in Madrid, which declared it illegal.

Puigdemont’s regional government claimed that 2.26 million people, just over 42 percent of the electorate, took part in the poll, but the vote was held without regular electoral lists or observers.

The regional government said 90 percent of those who voted backed secession, but opinion polls indicate Catalans are split.

In his address, Puigdemont again urged the government to accept mediation in the political deadlock

“This moment calls for mediation. We have received various offers in the last hours and we will receive more. All of them know I am ready to start a mediation process,” he said.

“I will repeat it as many times as necessary: dialogue and agreement are part of the political culture of our people. However, the state has not given any positive answer to those offers,” he said.

Madrid responds: Go back to the law

Politicians in other parts of Spain and a handful of civil groups have offered to try to bridge the divide between the two sides, but Prime Minister Mariano Rajoy says no dialogue can take place outside of the country’s constitution, which doesn’t include provisions for a region to secede.

“If Mr Puigdemont wants to talk or negotiate, or wants to send mediators, he knows perfectly what he first needs to do: go back to the law,” Rajoy’s office said in a statement after the Catalan’s leader televised speech.

“Mr Puigdemont has been outside of the law for way too long,” Rajoy’s deputy, Soraya Saenz de Santamaria, added.

“The Spanish central government is batting away this offer of talks, saying to this Catalonian government that ‘you really have to abandon all talk of independence or secession and then we can talk’,” Al Jazeera’s Karl Penhaul, reporting from Barcelona, said.

“But to that I’m sure that the Catalan government will respond that there is nothing to talk about in those terms,” he added.

European leaders have sided with Spain and, amid fears that Catalonia’s secession bid could find echoes elsewhere on the continent, the European Union has so far refused to step in.

European Commission Vice President Frans Timmermans stressed on Wednesday the need for Spain and Catalonia to talk to each other, but said there is a “general consensus that regional government of Catalonia has chosen to ignore the law when organising the referendum”.

Puigdemont will address the regional parliament Monday to review the disputed vote – a session that his parliamentary supporters say they will consider the independence declaration.

“We held the referendum amid unprecedented repression and in the following days we will show our best face to apply the results of the referendum,” Puigdemont said on Wednesday. 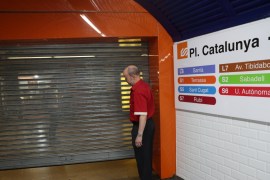