Turkish President Recep Tayyip Erdogan has called for “more decisive action” in response to the Kurdish Regional Government (KRG)’s attempt to split from Iraq, as he joined his Iranian counterpart Hassan Rouhani in renewing their opposition to the redrawing of the Iraqi borders.

“From this moment forward, more decisive steps will be taken,” Erdogan said on Wednesday during a joint media appearance with Rouhani in Tehran.

He did not say what specific steps Ankara would take, although Ankara had earlier threatened to shut down its border with the KRG.

“It was an illegitimate referendum, and we don’t accept it,” he said. “What referendum were they carrying out? No one has recognised them apart from Israel.”

He said Turkey and Iran have agreed to “confront” threats of the disintegration of Iraq, as well as Syria.

Rouhani also declared his opposition to an independent Kurdish state, even as he said that his country “does not mean any harm” to the Kurdish population.

“As far as we are concerned, Iraq is one single country,” he said. “We do not accept any geographical changes.”

“But the people of Iraqi Kurdistan are our good neighbours, are our dear brothers. We do not want them to experience any pressure, we do not wish to exert this pressure,” Rouhani added, while blaming Kurdish officials for the decision to proceed with the referendum.

He said the Kurdish referendum and plan to split from Iraq is part of a “foreign sectarian plot”.

On September 25, voters in the semi-autonomous Kurdish region of northern Iraq voted overwhelmingly to back a split from Baghdad, setting off a regional crisis.

Aside from Turkey and Iran, Iraq’s central government in Baghdad also opposed the referendum.

The United Nations and the US, have also opposed the Kurdish vote, saying it would distract operations against ISIL, as well as the civil war in Syria.

So far, there has been no agreement reached on military exercises between Turkey and Iran.

But for the first time since the 1979 Islamic Revolution, Turkey’s military chief of staff General Hulusi Akar visited Iran on Monday, signalling closer cooperation with an old regional rival.

On the economic front, Erdogan said he expects closer ties with Iran, as he announced an agreement to increase trade between the two countries from $10bn to $30bn.

He also said that the two countries will increase cooperation on energy, adding that Turkey and Iran will start trading using their own currencies.

They also vowed to take more steps in support of the Astana Deal, allowing for the creation of de-escalation zones in Syria. The two countries support opposing sides of the civil war. 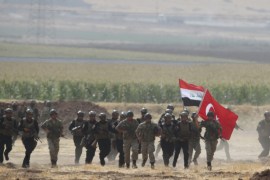 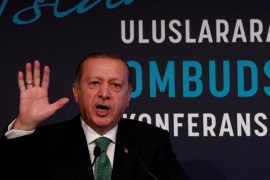 Saying that the Turkish military stands ready, president threatens to cut the Kurds’ oil exports through his country. 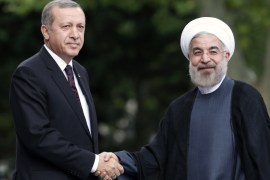 Can common concerns about US policies in the Middle East and Kurdish statehood ambitions bring Turkey and Iran together?