The Netherlands’ defence minister and the country’s military chief both resigned on Tuesday night over a critical report into a 2016 artillery training accident that killed two peacekeeping troops and wounded a third.

Jeanine Hennis-Plasschaert, who has been a caretaker minister since national elections in March, had been under pressure since the publication last week of the independent Dutch Safety Board report into the accident in Mali.

Cutting short, at least for now, what many had seen as a promising political career, she announced her resignation in parliament following a long debate into the report, which criticised the defence ministry for “serious shortcomings” in its care for troops sent on a peacekeeping mission in the African nation.

“I have put my heart and soul into serving in the defence ministry,” she told lawmakers. “But it stops here, today.”

Hennis-Plasschaert, who served as minister for five years, told lawmakers that defence chief General Tom Middendorp also was resigning. He had been due to leave his post later this week anyway, but a ceremony to mark that will no longer take place.

The report said that the two soldiers were killed instantly when a mortar shell exploded prematurely during a training exercise near a Dutch military base in Kidal, Mali. The other man was injured by shrapnel.

It criticised the ministry for hastily buying the mortar shells in 2006 without carrying out necessary checks, believing that American forces used them and must have tested their safety.

However, the sale contract made clear that was not the case and that US authorities did not guarantee the quality and security of the ammunition, the report said.

It added that the shells have “weak points” in their design, which allow moisture to seep in. That moisture, combined with hot temperatures in Mali, made explosives in the detonators unstable.

In the wake of the report, Hennis-Plasschaert ordered extra checks on ammunition and medical care for troops on missions.

The debate did not only focus on the mortar accident. Lawmakers also cited other reports in recent years pointing to inadequate government spending on equipment for soldiers amid austerity-driven budget cuts.

One populist lawmaker, Thierry Baudet, took part in the debate wearing a military vest that he said is issued to Dutch troops. He said many of them choose to spend their own money to buy better vests, which double as flak jackets, because they are safer.

A member of Hennis-Plasschaert’s own party, Han ten Broeke, opened Tuesday’s debate by saying he was shocked by the report.

“This report shows a list of avoidable mistakes,” he said. “What went wrong here may not happen again.” 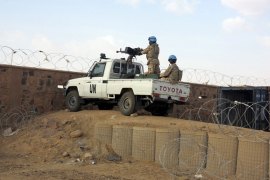 Blast hits convoy travelling between towns of Anefis and Gao in northern Mali, in latest attack against MINUSMA members.

Several people killed in attacks on UN camps in Mali

Armed assailants killed seven people and injured seven others in an attack on UN peacekeeping headquarters in Timbuktu.